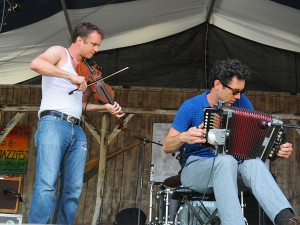 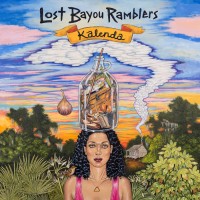 Lafayette-based and Grammy-nominated band Lost Bayou Ramblers are set to release their eighth album on September 26th. With Kalenda—a Caribbean dance, a Cajun rock and roll song, a female character’s name, and a Louisiana rhythm—the Lost Bayou Ramblers continue to redefine genre expectations while celebrating the complex and rich traditions of their Cajun roots. Kalenda contains songs that continue the Ramblers’ unique sound: Acadian accordion and fiddle, Cajun French lyrics, and elements of rock, punk, and progressive music. With this diverse group of recordings, Kalenda fits within Lost Bayou Ramblers’ wheelhouse, and their efforts to incorporate more electronic sounds add to the record’s vitality.

Kalenda consists of some tunes bearing Lost Bayou Ramblers’ signature Cajun-roots rock sound, yet some tracks stray off the beaten path, incorporating unorthodox production techniques. “Aloha Golden Meadow,” released last December, is one of those tracks; the mellow lapsteel combined with the hiss of summer bugs is as relaxing as a swaying hammock in a soft breeze. The track calms the listener down peacefully after the romping waltzes, exuberant instrumentation, and passionate French-Cajun singing present in songs like “Cote Clair Waltz” and “La Valse de Balfa.”

“Freetown Crawl/Fightin’ville Brawl” takes liberty with production is one of the more experimental songs on Kalenda. The repetitive bass drum combined with spoken word phrases of Cajun-French precede a cacophonous mix of backwards fiddle and accordion that is as invigorating as jarring. Another track of production interest is the title track. Beginning with a spoken word explanation of the title’s meaning, a mixture of acoustic and electric percussion emerges in a polyrhythmic exercise and Michot’s unmistakable melodic Cajun-French singing followed by another minute of nature noises that has a meditative effect.

Overall, Kalenda succeeds when the band branches out and experiments, bridging the gap between traditional instrumental and modern approach to supplement their already unique sound in a creative and exciting way.

Kalenda is set to be released on September 26, and is available for pre-order on their website and on Bandcamp. Lost Bayou Ramblers are also scheduled to perform on November 17 at One Eyed Jacks  at 10pm.