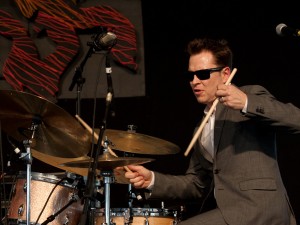 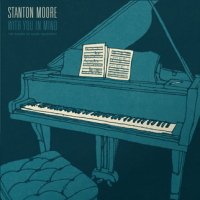 Allen Toussaint’s unexpected death in 2015 was a great shock to the city of New Orleans and the rest of the musical world. This shock especially hit home for Galactic drummer, Stanton Moore. Days away from embarking on a new Stanton Moore Trio record with pianist David Torkanowsky and bassist James Singleton, Moore abandoned that direction, and instead created a record that celebrates and honors the life of New Orleans’ musical hero. The sessions for this record evolved into musical all-star celebration featuring New Orleans’ finest musicians, like vocalist and percussionist Cyril Neville, trumpeter Nicholas Payton, Trombone Shorty, and saxophonist Donald Harrison Jr. What culminated was With You In Mind: The Songs of Allen Toussaint, a 10-track album of Toussaint originals allowing New Orleans’ finest to celebrate and honor Toussaint’s life and diverse body of work.

With You In Mind opens with a funky and infectious version of “Here Come the Girls,” featuring Cyril Neville’s soulful voice, and Trombone Shorty’s raspy and boisterous trombone playing elevates the energetic drumming and horn melodies for a strong opening track. That energy carries over to “Life,” a staple among Dr. John’s catalog, finding Moore’s funky street beat drumming married with Torkanowsky’s dazzling piano and dueling horn solos from saxophonist Skerik, and trumpeter Nicholas Payton.

“Java,” one of two instrumental songs on With You In Mind, is a jubilant composition driven along by the shuffling New Orleans-style drumbeat and catchy piano; its horn melody is a testament of Toussaint’s ability to craft catchy memorable melodies. This version’s catchiness is juxtaposed against the spiraling horn solos from Trombone Shorty, Donald Harrison Jr., and Nicholas Payton which allow the track to go other places sonically compared to Toussaint’s more reserved version.

Maceo Parker makes a special guest appearance and lends his blistering sax on funky and soulful versions of “Night People” and “Everything I Do Gone Be Funky.” Neville’s warm vocals combined with the bright saxophone and organ culminate into an especially danceable and funky couple of tracks.

Another highlight from With You In Mind is the title track. The track is calm and serene, centered on Torkanowsky’s delicate piano playing, and evokes the emotion that Toussaint’s work captured masterfully. The album concludes with a sprawling 13-minute, spoken word version of ‘Southern Nights,’ narrated by Wendell Pierce, opens up to a smooth organ solo, closely followed by a complementing trumpet solo both from Nicholas Payton. It’s a tender and heartfelt ending to a record that mixes energetic funk and slow swinging jazz to honor one of contemporary music’s most influential songwriters.

Overall, the heavily funky and jazz influenced interpretation of Toussaint’s work that allows some of New Orleans’ finest musicians expand into vivid, imaginative piece that honor as well as celebrate Allen Toussiant’s work and legacy.

With You In Mind: The Songs of Allen Toussaint is available on CD, mp3, vinyl from Stanton Moore’s website, Amazon, and Google Play.