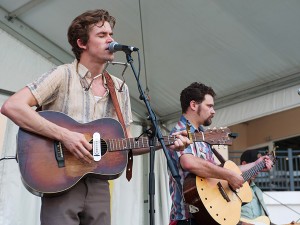 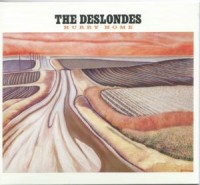 The down-home, roots-riddled troubadours known as the Deslondes have come together to release their sophomore record, Hurry Home, a shift from “country-folk to a psychedelic, electrified soul sound” that draws a larger emphasis on the electric guitar and organ. The Deslondes democratic sensibilities still remain as the band shares the songwriting and vocal duties between the five band members: Sam Doores, Riley Downing, John James Tourville, Dan Cutler, and Cameron Snyder; the result is a diversely written record that still sounds like it comes from one source.

Hurry Home, despite the album’s name, finds the Deslondes slowly and steadily driving along throughout the emotionally evocative 13-track album. The album’s title is inspired by the band members’ vagabond tendencies as well as their songwriting, which “revolve[s] around leaving and returning, or searching for home,” and its meaning. Hurry Home is mainly comprised of slower tracks whose polished harmonies and atmospheric guitars balance well against the upbeat, rockabilly tunes scattered throughout the record.

Hurry Home opens up slowly with a meandering acoustic guitar and Doores’ raspy voice on “Muddy Water,” a song filled with nostalgia and wistfulness that is supplemented with an airy piano and a dazzling pedal steel guitar that gently brings the listener up before slowly setting them down. “One of These Lonesome Mornings” is an upbeat rockabilly track driven by a boisterous organ and pedal steel guitar that balances well against Everly Brothers inspired vocal harmonies. While somewhat gloomy lyrically, “Lonesome Mornings” is one of the few more upbeat tracks whose musical arrangement is exciting and danceable.

The title track’s soft harmonica, airy pedal steel, and dynamic harmonies complement the slow, downtrodden beat evoking feelings of nostalgia, longing, and feeling beaten up by the throes of life. The track is sparse, yet heartfelt, and its simplicity and sparseness drives the record’s meaning. The Deslondes’ songwriting prowess shines prominently demonstrating their maturity, thoughtfulness, and ability to tell stories.

Other highlights on Hurry Home include “Hurricane Shakedown“ and “Beautiful Friend.“ “Hurricane Shakedown,“ another rockabilly number, is short and sweet, but the raucous chorus and upbeat tempo compete against a stabbing organ solo. “Hurricane Shakedown“ is the peak of energy for Hurry Home, yet it’s rocking enough to provide a nice break from the slower, subdued tracks that complete the album. “Beautiful Friend“ begins with gentle finger-picking guitar and revolves around a catchy harmonized chorus. The song creates a nice atmosphere that feels like a hot, quiet New Orleans summer night. Overall, it’s a touching sentiment that feels natural and is inviting to all listeners.

Overall, Hurry Home is an excellent sophomore effort from the Deslondes. From their poignant songwriting to the atmosphere they create with their instruments and voices, Hurry Home capitalizes on their unique sound in their search for a meaning of home.