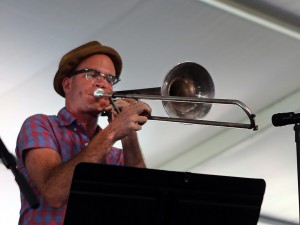 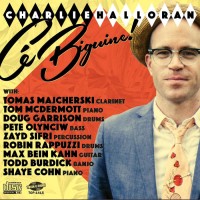 Versatile trombonist and occasional bandleader Charlie Halloran takes the opportunity to explore his passion for the music of the 1950s French Caribbean with his latest release Ce Biguine! (Biguine is a rhythm-centric musical style that originated in Guadeloupe and Martinique in the 19th century.) Halloran is accompanied by some of New Orleans’ finest including Tomas Majcherski (clarinet), Tom McDermott and Shaye Cohn (piano), Doug Garrison and Robin Rapuzzi (drums), Zayd Sifri (percussion), Pete Olynciw (upright bass), Mas Bein Kahn (guitar), and Todd Burdick (banjo). Together they’ve created a Caribbean record of 1930s era beguines set to ‘liven up any cocktail party.’

Released on Twerk-O-Phonic records, Ce Biguine! is Halloran’s follow-up to Charlie Halloran and the Quality 6, his first release as a bandleader. Recorded on a 78rpm acetate lathe, an approach to recording yielding some impressive results that blur the lines between the antiquated recording technique and Halloran’s modern evocation of the beguine style.

Ce Biguine! opens with the title track, a swinging flourish of trombone and clarinet set against a rhythm of a lively percussive beat which extends to some tasteful improvisation from the piano and trombone. The energetic and fiery soloing from each musician adds to the character of these tradition dance compositions and drives the pace of the record forward. The danceable beguine style of the 1930s is supplemented by the recording technique that takes the listener back in time to Martinique: surface noise combined with the pops and scratches of the 78 records adds grit to these songs and creates the façade that these recordings are decades old. It may seem gimmicky at first, but tones that result in the physical cutting of the lathe brightens up the timbre of the instruments creating different moods that add to the sensation of the music.

Other highlights throughout Ce Biguine! include ‘Les Deux Jumeaux,’ an upbeat dance track where the horns twirl around an energetic rhythm section that evokes an idyllic tropical attitude that combines Latin rhythms and French ballroom dancing. More subdued, yet equally transformative is ‘A Karukera;’ the mixture of jangly banjo and piano rhythms combined with the slow croon of the clarinet and trombone are accentuated by the acetate’s warmth and surface noise adding more depth into the illusion this music provides.

Ce Biguine! overall is crafted well, creative, and presented in a way that feels authentic, all while offering an interesting perspective into an otherwise obscure style of music. Ce Biguine! demonstrates Halloran’s diverse musical palette and is a refreshing take that honors a unique style in a unique way.

Charlie Halloran’s Ce Biguine! is available on CD and mp3 directly from his website, Bandcamp, Louisiana Music Factory, and Amazon. Check out his website to see where you can catch him playing!