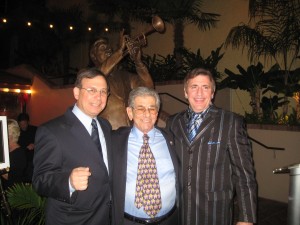 New Orleans paid tribute to one of its most famous native sons with the unveiling of a new bronze statue of the Chief in Legends Park on Bourbon Street Saturday night.

Louis Prima, Jr. and Joyce Prima had the honor of unveiling their father's statue.

Musical entertainment was provided by the NOCCA Jazz Ensemble with special guest appearances by Ronnie Kole and Louis Prima, Jr.

Later that evening, Deacon John and the Ivories paid musical tribute to Louis Prima at Snug Harbor, with special guest drummer Paul Ferrara. Renditions of "When You're Smiling", "Che La Luna", and "Sing, Sing, Sing" brought the audience back to the time when Paul played with Louis and Keely Smith in the late fifties. Paul wrapped up his appearance with an a cappella version of "The Bigger The Figure", Louis Prima's hilarious ode to obesity, based on Rossini's aria from The Barber of Seville.