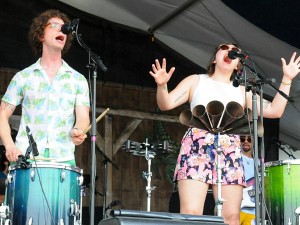 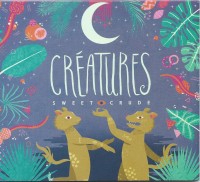 Over the past three years, Sweet Crude has released three singles, an EP and have been performing live to build and perfect their sound. Créatures, their debut LP, pays off all that hard work in powerful bilingual harmonies, catchy pop choruses, and drum-pounding rhythms. Through this, Sweet Crude emerges with an exciting, bilingual tribute to the sounds of New Orleans and culture of Louisiana.

Over the course of the 11-track album, gorgeous five-part harmonies give greater life to the pop-influenced melodies. Opening with ‘Weather the Waves,’ vocal harmonies swell and lift up Sam Craft’s switch from Louisiana French and English during the verses. The band’s heavy percussion instrumentation lends to the band’s playful and energetic sound and carries the listener all the way through the record. Their danceable drumbeats are supplemented by moments of dazzling synthesizers that add a modern tinge to their otherwise-traditional aesthetic. ‘La Cheminée’ has a driving beat, but contains an air of delicacy from Marceaux’s falsetto harmonies and Craft’s violin playing , evoking the musings of an early Arcade Fire without the overbearing sociological tone. The catchy hooks throughout are indubitably infectious despite the language in which they are sung.

Other highlights include ‘Mon Esprit,’ a track that allows Marceaux's voice to stretch out as she belts about a woman’s sacrifice as it pertains to her reality. The starkness of the beginning of ‘Mon Esprit’ is tender, and is juxtaposed nicely against a cinematic synth-laden backdrop and reaches great heights. Sweet Crude artfully composes songs that are danceable, interesting, and highlight a culture not represented in mainstream music. Their use of harmony and percussion instruments lends itself well to playful and energetic live performances as well as fun, easily listenable studio recordings. Créatures is a successful summation of the Sweet Crude’s hard work over their beginning years as a band and is an innovative engagement of the Acadian traditions.

Créatures is available on mp3, CD, and vinyl from their label’s store, Louisiana Music Factory, Google Play, and iTunes.