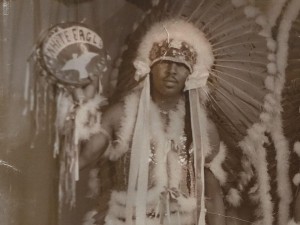 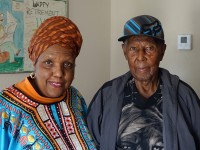 Born in 1923, he said that he first became fascinated by the Mardi Gras Indians who danced through his Uptown neighborhood. Edward remembered that the Mardi Gras Indian tradition dominated schoolyard discussions in the late 1920s as the children at Lafon Elementary School talked about the Indians at recess.

Brother Tillman, Big Chief of the Creole Wild West and a leader of the Uptown Mardi Gras Indian tradition, lived near Edward’s house. Before long, 12-year-old Ike started going to Brother Tillman’s house where learned to sew the suits that would make him part of the tradition he would love throughout his life.

“Brother Tillman taught me how to sew,” he said, and when Big Chief Tillman gave him permission to join the Creole Wild West, he made his first suit at the age of 13. It was green, he recalled, admitting that his first attempt at sewing “wasn’t outstanding.”

“But after that,” he continued, “I began to be one of the best.”

“I came up under the Creole Wild West,” Edward said. “That’s where I started.”

Promoted to Flag Boy, he proudly carried the flags for the Creole Wild West, the Golden Blades, and the White Eagles -- the gang he helped to co-found with Big Chief Robbe (Robert Nathaniel Lee). Edward reluctantly served one year as Second Chief of the White Eagles, accepting the position after Big Chief Lawrence Fletcher wouldn’t take “no” for an answer. He always wanted to be a Flag Boy, out in front of the gang, waving his flag, and sending messages back to the Big Chief. He didn’t want to be in the back of the gang.

In a February 2017 interview with the Times-Picayune, he told a reporter: “But with the flag, you’re free. You’re free. You wave your flag. You do what you want.”

As a child, Ike Edward noticed the beauty of butterflies around his Uptown neighborhood, and when he started sewing his first suit, he beaded a butterfly patch. The butterfly would become his special symbol.

Edward delighted in telling visitors that when he started, he had little money for supplies to buy materials for his suit. Ever resourceful, he approached the ragman who came through his neighborhood, and he begged or bought old ball gowns and fancy dresses from which he carefully removed the beadwork. He also looked for discarded lampshades that were decorated with beads.

Feathers came from the meat markets that killed and cleaned turkeys. With some flour-and-water paste, he attached little pieces of peacock feathers to the tips of turkey feathers that he had colored with Tintex dyes.

As an adolescent, Isaac Edward joined an Uptown boxing league and remembered competing with the children who boxed for the Downtown San Jancinto Club. As soon as he got his first bicycle, he found a job making deliveries for a drugstore. Later he worked at the Big Shot Bottling Co., the Fulton Bag Company, and the Delta Shipbuilding Co.

During World War II, he first served in the Army Air Corps and then transferred to the 92nd Division, and he fought on the front lines in Italy. He was on his way to Japan when the war ended.

After WWII, he found a job as a longshoreman, a position he held for 38 years. Edward observed that many people working on the docks were members of different Mardi Gras Indian tribes.

In 1952, he decided to retire from the grueling demands of masking, and he left the White Eagles. He stopped sewing for years; but, in 2002, he became involved again through his friendship with Cherice Harrison Nelson, the daughter of Big Chief Donald Harrison Sr. and a teacher at Gayarre Elementary School. She invited Mr. Ike to come to the school and teach the Mardi Gras Indian tradition to the children. Thereafter he beaded patches and helped make suits for children masking in the Young Guardians of the Flame. “I loved the children,” he said, making it clear that working with them gave him a new lease on life.

He sewed and sewed, creating one-of-a-kind butterfly patches for friends, as well as making artistic designs for display in schools. One year he beaded an elaborate pall to be used to cover the caskets at the funerals of members of the Mardi Gras Indian tradition.

Mr. Ike continued sewing up until about a month before his death. To the amazement of visitors, he grasped thread between his fingers, and in one effortless movement, easily directed the thread through the eye of a needle -- without glasses.

Mr. Ike lived in New Orleans until the flood waters following Hurricane Katrina destroyed his home, and then he settled in Houma, where he fished as often as he could. His generosity was boundless. He would bring back crabs and shrimp to share with his neighbors. If he went to a St. Patrick’s Day parade, he caught baskets of cabbages and vegetables, which he shared with everyone. He was known for his generosity, and he explained it this way:

“I’ve sewed and sewed for people, and I never asked anybody for money,” he said. “I just like to give. I love to give.” He also was generous with his money. “I’ve given people money, and they have never given it back to me. I don’t care. I had money, and I said, ‘Here, take this money. I’ll get some more.’”

In 2016, Mr. Ike was featured in a WWOZ Carnival episode of “New Orleans Calling.” That same year, he held his first solo exhibition of his beaded designs at the Arts Estuary. Curated by Herreast J. Harrison, the exhibit brought Mr. Ike to the attention of the art world, and collectors bought many of his pieces. A poignant part of Mr. Ike’s exhibit was a Big Queen suit worn by Queen Cherice Harrison Nelson, who noted that Mr. Ike created special butterfly patches for her to commemorate her battle with cancer.

In February 2017, he was featured in a front page story in the Times-Picayune.

To the end, Mr. Ike loved the Mardi Gras Indian tradition. As he rested in his hospital bed days before he died, he busily planned his funeral. Using a borrowed cell phone, he called Big Chiefs to perform certain duties. He instructed Big Chief Derrick Hulin, of the Golden Blades to bring “a crowd” of Mardi Gras Indians to his funeral. He told him:

Topic tags:
In Memoriam, Takin' It to the Streets interviews