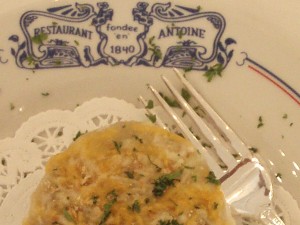 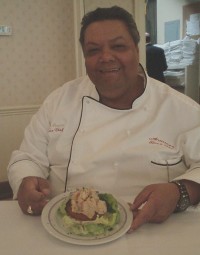 Chef Regua and his signature dish, Shrimp Regua (Photo by Sharon Armstrong)
Antoine’s is a name that is as much a part of the history of the city as the Battle of New Orleans or the Mississippi itself. It is an old thread in the NOLA tapestry. And no wonder, the restaurant spans 5 generations, over a century and a half of history. This year, Antoine’s tasty contribution to the French Quarter Festival will be Oyster Bonne Femme over Bow Tie Pasta – a dish that is served at the restaurant - and Shrimp Regua - named after the restaurant’s Executive Chef Michael Regua. Mr. Regua has been working at Antoine’s for over 35 years, and is as big a fan of the French Quarter Fest. “I wanted to give them something hot and cold,” Mr Regua said, explaining his choice of dishes for the Fest’s audience. “It gets so hot out there at the Festival. The Shrimp Regua is served cold. Bonne Femme means ‘good wife’, and it is the hot dish.” A hot dish indeed. The Oyster Bonne Femme turned out to be a rich marriage between tender chopped oysters and crabmeat, and a rich, smooth sauce flavored by just a hint of tarragon. The Shrimp Regua was served over a fried green tomato, and covered with a house-made horseradish, Lea and Perrins mayo, all on a bed of crunchy Boston lettuce. Both dishes were delicious. “People used to sit down for three hours or longer at a meal,” said Mr Regua. “But these are different times, and people just don’t have the times to do that. You have to give people what they want, but you have got to keep to a certain standard – and we are blessed by our seafood here.”
Topic tags:
Live event