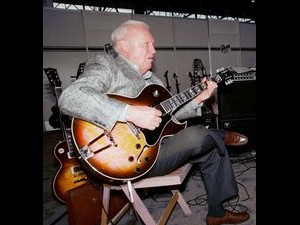 The first time I heard Herb Ellis' guitar was on a Lester Young album called "Pres & Sweets". I searched high and low for about a year trying to find that LP after it was recommended to me by a teacher when I was in music school at San Francisco State University many years ago. When I finally found it, the disc stayed on my turntable for about 3 months. I was riveted by the wispy sound of an aging Lester Young's saxophone, the smears and bends of Harry "Sweets" Edison's trumpet — and the fluidity of Herb Ellis on guitar.

Although I had originally gotten the album so I could study Sweets' trumpet style, I couldn't help but be curious about Herb Ellis, so I traced him through other records I already had, like Stan Getz's "For Musicians Only" and "Diz & Getz", Oscar Peterson's piano trio albums of the mid- to late 50s, and even on well-worn classics like the Louis Armstrong and Ella Fitzgerald duet albums.

I was shocked to find he's on about half the 1950s Verve records I have by the likes of Anita O'Day, Coleman Hawkins, and a host of Ella Fitzgerald albums.

Herb passed away on March 28 at the age of 88 after a long battle with Alzheimers. The man and his ubiquitous liquid guitar tone will be missed by more than a few jazz fans.