The Inside View on the Krewe du Vieux 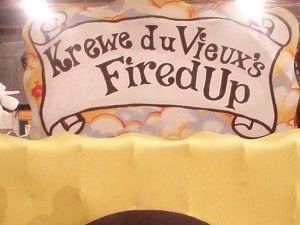 One of the new floats that will be featured this year. 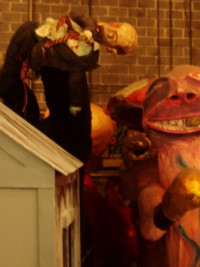 Past "Vieux" of parades gone by.
As everyone in New Orleans knows, becoming a member of a New Orleans' Mardi Gras Krewe isn't always the easiest thing to accomplish...just try and join Rex...I dare you.

But Rex doesn't hold the patent on exclusivity, or popularity. While the big parades that roll on Fat Tuesday celebrate the last day of Mardi Gras season with rare style, for many it is the hilarious and often licentious walking parade of Krewe du Vieux that really kicks it off.

Finding the warehouse where the Krewe du Vieux build their floats wasn't easy either. The address I had said somewhere on Royal Street, but the warehouse entrance itself was tucked ‘way out of sight. Once found, however, that open door gained me entry into a brightly lit world of glittering, painted floats, which even half-finished still managed to reflect the lewd sarcasm and pointedly savage and ice-pick accurate humor for which the Krewe du Vieux is infamous...and so very well loved.

The Krewe du Vieux is made of up 17 subkrewes, each with their own rather exotic titles, such as Seeds of Decline, Mystic Krewe of Comatose or Krewe of Space Age Love, and each has two Captains and a varying number of by-invitation-only members.

Lee Mullikin, Vice President of Krewe du Vieux and one of the Captains of the Mystic Krewe of Comatose, showed me around the warehouse, while exacting a promise from me not to spoil the surprise by giving away the themes of the floats before the parade. I can say, without betraying his trust, that the floats are very funny, and more than a little rude...go figure!

This year the King of Krewe du Vieux will be the Night Tripper himself, Dr. John.  His Consort, the official title the Krewe du Vieux uses instead of ‘Queen', will be Voodoo Priestess Miriam Chamani, Bishop of the Spiritual Church and mistress of the Voodoo Spiritual Temple and Cultural Center on North Rampart Street.

"We've never had a celebrity of the status of Dr. John before," said Lee. "He's a real exception ‘cuz he will show up at a neighborhood bake-sale, or some other little thing, despite his status as a musician. He is really a home-boy...and Miriam goes by the name of Queen Miriam."

Last August, a fire almost destroyed the Krewe's busy warehouse, and evidence of the blaze can still be seen in the twisted metal of some of its roof trusses and wall supports, which were warped by the intense heat of the flames. In several places, the walls of the warehouse are still blackened and charred. As a result of the fire, two floats were completely destroyed and a third severely damaged and, according to Lee, repairs set the Krewe's parade preparations back at least two months.

"See that black pipe over there?" Lee said, pointing. "The way that it is folded over? The flash-point from the fire descended from the roof until it was only twelve feet off the floor, so what happened was that everything from the top down melted into nothing. When the firemen came in and put it out we were minutes from the whole place going up. So a shout out to the firemen of Engine Number Nine right there on Esplanade for doing such a good job. "

So, what is the message of Krewe du Vieux this year, and what can people expect to see in the French Quarter on January 30th?

"Sex, religion and politics are the Holy Trinity of what we are after here," Lee smiled. "There are nineteen different bands that night - it is controlled anarchy when we are walking through the streets. We try to insult the people who have been doing bad things to the State. But the people know that we are not your typical parade, you know, beads and 'show us your tits'. They understand us."

Lee described what he called the deep social function that Mardi Gras serves to the New Orleans community, as well as emphasizing the traditional Carnival aspects of the Krewe du Vieux parade, such as the hand-pulled or mule-pulled floats, and the individually creative and satirical themes of the floats.

"We have politicians who we insult roundly," he said. "Many conservative groups do not like us. The Krewes are serious, but they do it in a fun way. We bring people the opportunity to really highlight the problems that beset this city...whether it is poverty, or crime or violence. They love the city, love the music and you can feel that to your bones as you walk through the streets. It's just a marvelous thing."
Topic tags:
Mardi Gras, Live event