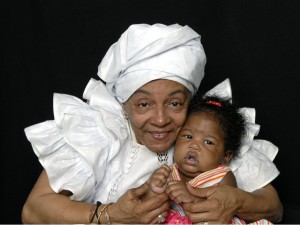 WWOZ would like to recognize the passing of Dyan "Mama D" French Cole, a longtime New Orleans community activist, leader, and supporter of New Orleans music and culture. Mama D passed away Saturday, May 20 at the age of 72 after a long battle with cancer.

Mama D was a fiery and passionate supporter for civil rights. She attended nearly every city council meeting and testified at both the state and federal level. She was also an ardent grassroots activist, doing work day in and day out in the neighborhood to create a stronger and safer community. After Hurricane Katrina, she organized crews she called the "Soul Patrol," to go through her native 7th Ward and other neighborhoods, saving people, feeding them, and finding clothes, assistance and other relief. She housed so many people at her home on Dorgenois Street that some people referred to it as Recovery Camp Dorgenois.

Mama D became the first president of the New Orleans branch of the NAACP in 1975. She had a special interest in young people and was always generous with her time and resources. She was a frequent advocate for young black men facing trial or sentencing at the Orleans Parish Criminal District Court.

The staff and volunteers of WWOZ extend their deep sympathies to Mama Dee’s family: her sister, Audrey Jackson; her son, Byron Cole, and her many grandchildren, friends and loved ones.