Authored by:
Your Friend
Published on: September 28th, 2009 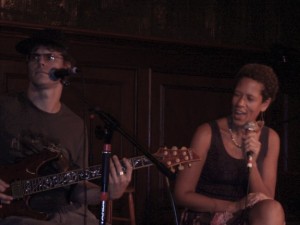 Story and photograph by Ignacio Sanguinetti.

Margie Perez is a lovely singer and also a fantastic songwriter. Her last CD, “Singing for my Supper,” is soon going to be re-released through a non-profit label dedicated to helping New Orleans musicians. You can always find her performing all over the city. We recently had a short chat with her at the Balcony Music Club (BMC).

OZ: Tell us about your shows these days, what are they like?

MP: Well, I’m singing with different bands and also with my own band. We play clubs, festivals and private parties, but I also sing with Michael Skinkus and Moyuba, an Afro-Cuban band.

OZ: How would you define yourself?

MP: I’m a New Orleans musician (laughs). I sing jazz, blues, pop, bossa-nova, even psychedelic rock! I like to get myself involved in as many music projects as I can. That´s what I do; that’s why I live here.

OZ: Are you working on a new CD?

MP: Actually I´ve just released a CD last year. What is going to happen now is that it’s going to be re-released on Threadhead Records, a non-profit label dedicated to funding projects of New Orleans musicians. What they do is funded by donations made specifically for recording, and the artists pay the costs back with some percentage in interest; that percentage goes to the New Orleans Musicians Club. I just heard yesterday that they already have donated over $100,000.

OZ: Tell us about the way you compose your music.

MP: I usually I have the music in my head, sometimes it’s a chorus, and it stays with me for a while. Then I´ll come back to it and I’ll finish the work. The first song I ever wrote probably took me the shortest time to write. It is called “Ooh Baby La La.” The first time I came to New Orleans for Jazz Fest, something just changed in my life, and I started to write music. As soon as I was on my flight back (to Washington D.C.), I stared to write this song.

OZ: You sing in English and in Spanish, how do you decide the language for each song?

MP: Yeah. I´m listening a lot to WWOZ. I’m getting such an education on New Orleans music. There is so much music that has been made in the city over the years. Listening to WWOZ, you can hear the coolest songs ever. It could have been written many years ago, but for me it is a new song (laughs). I love to stay here; this city is just great.