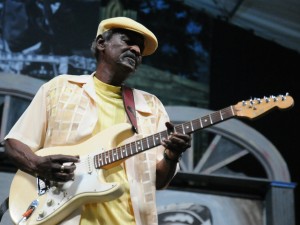 We're coming to you all weekend long from Jazz Fest 2017! Here's a preview of one of our scheduled broadcasts for Sunday, April 30: Lil Buck Sinegal Blues Band with special guest Barbara Lynn.

Lil' Buck Sinegal, "Master of the Stratocaster," from Lafayette, Louisiana, is the guy Eric Clapton says is the best blues guitarist alive. His career has spanned more than five decades, with over 300 recordings, having played and recorded with Clifton Chenier, Henry Gray, Rockin’ Dopsie, Buckwheat Zydeco, and other blues artists, including Grammy-winning efforts with Paul Simon’s 1987 album Graceland.

Lil' Buck (Paul Alton Sinegal) was born on January 14, 1944 in his parents' Lafayette, LA home on St. Charles Street. Sinegal is the fourth of six children born to his Creole parents, Joseph Senegal and Odette Broussard. He honors the tradition of family ties seen so often in Southwest Louisiana. Despite his career taking him to many parts of the world, Lil’ Buck maintains his family home as a secondary residence where he and his close friends gather to cook, barbecue, and have refreshments while reminiscing and telling stories.

Around the age of ten or eleven (1954-1955), Sinegal received his first guitar- a Harmony, from his blind uncle from New Iberia. Within a short time, Sinegal began to figure out licks and parts of tunes. It was at this time that Sinegal began to earn money playing the guitar down at the corner newsstand. He would sit outside on the corner and some of the newsstand patrons would put coins in his guitar to encourage him. Sinegal would give his grandmere the money. She kept it in a sock. When he wanted some ice cream or a soda, she would pull some change from the sock and give Sinegal some coins. Playing the guitar replaced Sinegal’s dancing activities.

Within a year or so after receiving the guitar from his uncle, Sinegal had an amazing encounter with Raymond "Swank" Monet, a very talented Lafayette Creole guitarist. Listening to Sinegal reminisce about this encounter, one gets the feeling it was a “mystical” experience. Sinegal credits the encounter as the event that sealed his fate with the guitar and music.

WWOZ was on hand to capture Lil Buck performing 'Down Home Blues' at the Blue Moon Saloon in Lafayette in the summer of 2014. Check it out below and tune in on Sunday to hear his performance from the Blues Tent at Jazz Fest from 1:20-2:15p.