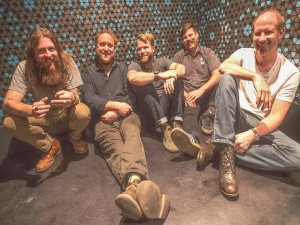 One of the most wonderful things about the New Orleans Jazz and Heritage Festival  is the depth and breadth of musical talent that it brings to the Crescent City over two glorious weeks of music, food, and fun – and not just out at the Fairgrounds.

This Jazz Fest season, acoustic Bluegrass rock-and-rollers Greensky Bluegrass will bring their uniquely progressive sound to New Orleans on Saturday, May 6, 2017 at the House of Blues.

Since their greenstick days performing at open mikes in their home town of Kalamazoo, Michigan, Greensky Bluegrass has come a long way both in terms of road miles and sound.  One of the hardest working bands in Bluegrass, they are both veterans of life on the road and innovators, some might even say iconoclasts, of traditional Bluegrass music.

“I learned to play Bluegrass side by side with these guys,” said Mike Devol. “But over the years, we have written a lot of our own material and developed our own sound. Now we still play Bluegrass in the sense that we play Bluegrass instruments, and we also occasionally play Bluegrass sets on stage, but the way we approach our songwriting and our live performances is very much as a rock band. It is a big production, high volume experience.”

“Paul Hoffman and David Bruzza are prolific songwriters and they write about what they know,” said Devol. “We are from Michigan, so there’s not many odes to the sweet smoky mountains of Appalachia. But there is a darkness in Bluegrass music – the old murder ballads, being poor, being heartbroken. Our band isn’t bleak but a lot of our songs capture things like the bleakness of the Michigan winter, and the work ethic of blue collar Mid-West - there is a realness to shared hardships and themes of regret, wherever you come from, that just makes for really good songs.”

Mike Devol joined the group in 2004, shortly after the release of the band’s debut album Less Than Supper. But it was the summer of 2006, when Greensky Bluegrass won the Telluride Bluegrass Festival Band Competition, that “really lit a fire” for the band, according to Devol.

“I think the world of Telluride,” said Devol. “It encompasses what is best in the Bluegrass world we sort of inhabit. There is no venue like it, just the natural beauty and majesty of the place. It also gave us the chance to meet our heroes – Sam Bush, Bela Fleck, Gerry Douglas, those guys – as well as virtuoso players like Chris Thile and the Punch Brother. All these people changed Bluegrass by the way they played it, and for them to embrace what we were doing was huge.”

And, after more than a decade, Greensky Bluegrass now finds itself in the position of mentoring young musicians, according to Devol.

“That is such an honor for us,” said Devol. “There is plenty of talent out there who can carry the torch farther than we can, and in a different direction from what we can because they have different ideas about taking the tradition - and respecting it - but also moving it forward, and making it their own.”

Along with Telluride, another city that enjoys a special place in the hearts of Greensky Bluegrass is New Orleans, said Devol.

“New Orleans is delicious,” said Devol. “I love the food, the street culture. I love the little adventures you can go on. I love the late nights in the French Quarter, just coming in and out the music clubs on Frenchmens. There is vibrancy to New Orleans that you don’t predictably see in other American cities. I just hope that we don’t get into too much trouble!”