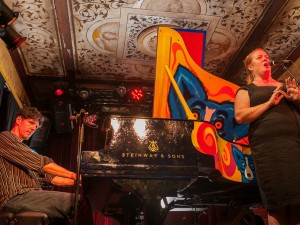 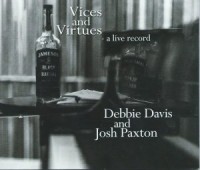 Vocalist Debbie Davis and pianist Josh Paxton team up together to release their newest live album Vices and Virtues – a live record. After over 20 years of collaboration, Vices and Virtues marks their solo debut as an actual duo. Recorded live on March 4 at the U.S. Mint, this live recording captures the "spontaneity, intimacy, and dynamic range" of the two musicians as they soar through a selection of standards mixed with the jazzy renditions of popular songs. Overall, this recording is successful in capturing the intimacy and proficiency of these musicians and is a great representation of their musical prowess.

The performance begins with a solid version of 'On the Sunny Side of the Street,' which immediately provides the listener with something pleasant as the piano bounces along to Davis' rich, soulful voice. Paxton is just getting started with 'Lulu’s Back In Town,' a Fats Waller tune, and tears apart this piano solo after her powerful voice swells and artfully handles the high-paced lyrical phrasing. While some tracks are full of energy, the duo also is capable of intimate moments, particularly on the track 'It’s Not the Years, It’s the Miles.' Davis sings Alex McMurray’s song of introspection and looking back on life beautifully, and combined with Paxton’s piano, the placement in the set of this song is a good dynamic shift overall, before the duo jumps into some more energetic songs like 'When I’m 64' and 'Lady Madonna.'

The live recording is an excellent representation of Debbie Davis’ powerful and developed vocal expertise along with Josh Paxton’s ability to glide around the piano. These artists breathe new life into these songs and highlight their own skill by the ease in which they shift through the different styles of these songs. Debbie Davis and Josh Paxton’s debut record as a duo will have you dancing and singing along for a well-spent 90 minutes.