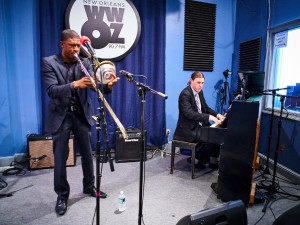 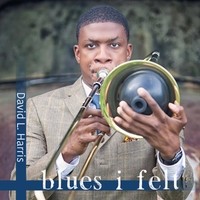 Trombone player, vocalist, and composer David L. Harris opens up with his debut solo album entitled Blues I Felt combining his "old-school leanings" towards traditional jazz with his sultry interpretation of blues and modern jazz. With the help of Shea Pierre (piano), Jasen Weaver (bass), and Miles Labat (drums), Harris’s trombone evokes deep emotion in the listener, while his vocals add to the smoothness and clarity of the ensemble’s playing to create compositions that are subtle and dynamic, while not being too overwhelming to the listener.

This 11-track album opens up with a dramatic and emotional track called ‘A Pisces’ Dream’ in where the trombone plays a catchy melody that leads to a call and response from the drummer and trombone. The single from this album, an interpretation of the Muppets’ ‘Bein’ Green,’ gives Harris a chance to croon with his crisp voice, while the piano meanders around the groove giving the track an airiness to it. A muted trombone solo complements Harris’ voice before it picks up to end into a swinging groove that gradually plays with the dynamics.

Other highlights on this album come from the more energetic and swinging tracks in where Harris and Pierre’s piano are given the opportunity to improvise and delve deeper into the groove, especially on ‘DJ’s Introduction.’ ‘There Is No Greater Love’ also stands out from the other tracks and is a nice culmination of all the elements in Harris’ playing that he’s known for live. His trombone dances around the airy drums before the vocals come in with a staccato-like punch to then make room for tasteful piano and trombone solos.

Overall, David L. Harris’ solo debut, Blues I Felt, is comprised of subtle, dynamic compositions that are emotional and thought provoking while interspersing energetic, swinging compositions full of exceptional improvisation. Harris is successful at not overwhelming the listener with Blues I Felt, and instead displays his technical proficiency through his subtle, yet dynamic arrangements.

Blues I Felt is available on CD and mp3 from Peaches Records, Google Play, CDBaby, and iTunes. You can catch David L. Harris every Tuesday night in April at the Carver Theater starting at 6p.