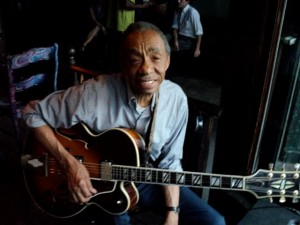 A true treat in the studio this morning as we welcomed 91-years young Warren Battiste in to perform on Fresh Fig Jam with host Olivia Greene. It is not everyday we get to share a living luminary such as Mr. Battiste with our audience, live and in-person! Check out his performance below, and learn more about his storied career under the video player.

New Orleans native son Warren Battiste, is another one of those unsung heroes in the annals of jazz who deserve more recognition for their contributing efforts to the cause of American music.

Warren Battiste was born in New Orleans in 1925 and was taught to play the guitar by his father who was a banjo player at Preservation Hall. Warren then completed 4 years of instructions at Gruenwald Music School in New Orleans, where he became proficient not only on guitar, but also bass, banjo and piano.
He was the first guitarist to play with Fats Domino on a regular basis, and went on to play with Illinois Jacquet in New York. This has given him a very broad knowledge from classic blues to R&B and jazz, which is displayed in his playing. In New Orleans Warren has performed at numerous jazz clubs on Bourbon Street, Preservation Hall, Snug Harbor, the Matador and many others. Warren also appeared in the film Shy People starring Jill Clayburgh and Barbara Hershey.  He has taught music at Wequachie High School, Essex County College and the Newark Art Center in Newark,  New Jersey. Warren has performed with fellow guitarist George Benson, organist Jimmy McGriff and accompanied classic vocal groups as The Platters and The Inkspots to name a few.
In 2000 he received the Lifetime Achievement Award in Jazz from the New Orleans Jazz and Heritage Festival.  In 2001 he released his debut CD Street Jazz to rave reviews and solid sales.  He was back in the studio in 2004 for a second CD entitled Just Friends.

Warren Battiste was one of the many victims of hurricane Katrina in 2005, having been rescued from an Interstate overpass where he had escaped with several others and survived for two days after being forced to leave his residence because of the floodwaters.  With all that behind him now, he has reached into the experience to come out with a new record release of Quiet Storm In New Orleans.  This is a fine set where his regular trio mates of bassist Jim Markway, and drummer Richard Hale, are joined by pianist Larry Siebert.   "Quiet Storm" is an impressive recording by a New Orleans guitar master in his 90s still in prime form.