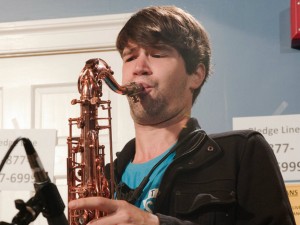 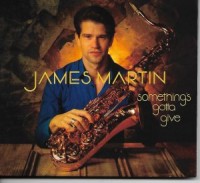 Saxophonist and songwriter James Martin is here with Something’s Gotta Give, his sophomore follow-up to Blue. The new release is an 8-song record that demonstrates Martin’s versatility as a saxophonist, singer, and songwriter. Released on January 13, this album is Martin’s reflection of the past, combined with an effort to maintain his identity “without being swept away in the never-ending party.” A reflection on the hustle and bustle of the “never-ending gig” is highlighted by the music’s high energy and is complemented by lyrics that empathize tones of complacency during this search for inner peace.

Highlights on this album include the title track, ‘Something’s Gotta Give,’ which captures Martin’s smooth voice and exceptional musicianship. The high energy of the rhythm section allows Martin’s playing to flourish and adds strength to his vocal delivery. ‘Same Old Same Old’ opens the album with a funky New Orleans style drumbeat and a rhythm section that the listener cannot ignore, drawing the listener in and inviting them to get up and dance. Another highlight comes from ‘Maintain Composure,’ an instrumental track that begins with this funky horn melody that continues throughout the track and holds its own. While Martin proves his strength lyrically and vocally, this track is a nice reminder of his musical proficiency and a reminder that Martin is no stranger to commanding the band.

Overall, Martin is successful in creating interesting, danceable, and energetic music that expresses Martin’s grapple with the madness of life combined with having a career in music. This release is cohesive and focused, and while the intention of the music seems personal for Martin, it embodies themes and struggles relatable to everyone.

James Martin and his band will be celebrating the new release at Chickie Wah Wah on Saturday, February 11. Something’s Gotta Give is available on CD and mp3 from the Louisiana Music Factory, CDBaby, Amazon, Google Play, and iTunes.