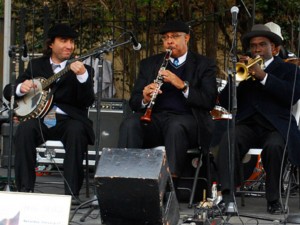 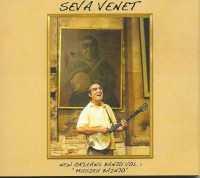 Seva Venet pays homage to the history of New Orleans banjo music with his new release, New Orleans Banjo Vol. 1 “Musieu Bainjo.” Venet’s goal for this project was not self-satisfying; instead, Venet hopes to shed new light on the important and vibrant history of the banjo and its cultural heritage in New Orleans music. This 12-track release features a variety of style of tunes from ragtime, creole, pop, and blues in the vain of traditional jazz.

Venet employs the help of the city’s finest, versed in traditional New Orleans music, to rejuvenate these songs and make a statement about the importance of the banjo in traditional American music. Featured on the record are Gregg Stafford and Leon “Kid Chocolate” Brown (trumpet), Dr. Michael White and Orange Kellin (clarinet), Steve Pistorius and Marie Watanabe (piano), Kerry Lewis (bass), Frank Naundorf and David Harris (trombone), Jerry Anderson and Shannon Powell (drums). Venet owes credit to Shannon Powell, whom he met and played with in 2002 and inspired Venet to pick up the banjo.

New Orleans Banjo Music Vol. 1 “Musieu Bianjo” is a culturally edifying piece as much as it is a journey through the banjo’s history. The CD is accompanied with two PDF files containing an extensive essay and photos of the history of the banjo in New Orleans as well as biographic information on the New Orleans banjo legends that influenced these tunes. Venet is calculated in his song choice and pays specific attention to acknowledge the catalogue of some important players, particularly Danny Barker. 'Some Of These Days,' 'Stick It Where You Stuck It Last Night,' and 'Careless Love' are all Danny Barker songs in some form or another allowing Venet to explore Barker’s playing style through “sophisticated chords” and rhythms Barker was known for best.

Some highlights from New Orleans Banjo Music Vol. 1 “Musieu Bainjo” is Venet’s original arrangement of the title track, 'Musieu Bainjo,' an old Creole song, that lends itself to capturing and recreating the “sonic landscape of New Orleans.” Another highlight from 'Musieu Banjo' is 'Some Of These Days.' Gregg Stafford, who worked with Danny Barker in the 1980s, lends his vocals to the track and allows for each soloist to flourish and emulate those New Orleans players.

Each track comes with Venet’s commentary on what ensemble played the song regularly and what artist’s style Venet hopes to evoke through his playing, providing a more detailed narrative for the listener and connecting them to the past. Venet is also successful in keeping true to the nature of the music, but reimagines it, with the help of David Farrell; to produce high quality recordings letting the listener clearly hear each instrument instead of the muffled recordings characteristic of recordings from that time.

Overall, this release from Seva Venet is successful in honoring the banjo and celebrating its presence in New Orleans’ musical history. According to Venet, “the banjo is a social instrument, and satisfies the need of the community to celebrate together: to dance, to sing, and to tell a common story.” This release demonstrates the culture of dancing and celebration through the banjo’s music, with danceable tracks, catchy call-and-response lyrics, and impressive musicianship, to successfully honor an instrument with a deeper social context and rich cultural history.