'Hungry Ghost:' new video from Hurray for the Riff Raff

Still from Hurray for the Riff Raff's 'Hungry Ghost' 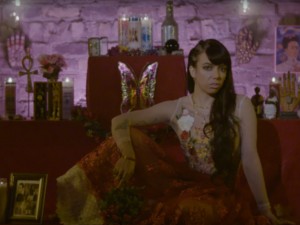 A new video from the New Orleans-based Hurray for the Riff Raff (Alynda Lee Segarra) has been released in anticipation of their upcoming album, The Navigator, due out March 10 on ATO Records.

The video has been released in the wake of the tragic Ghost Ship fire in Oakland, California and serves as an ode to safe DIY spaces and the art and communities that thrive within. It was directed by another talented local artist, Sarrah Danziger, and filmed in New Orleans.

"As artists and freethinkers we must care for each other and hold these safe spaces close to us," says Segarra. "With those we lost in Oakland and Orlando in our hearts, this video is a love letter to all the queer people who are putting on intentional events that promote nights of safety, unity, and freedom."

Hurray for the Riff Raff is embarking on a European and North American tour in January. They'll be appearing locally at the Civic Theatre on May 5.