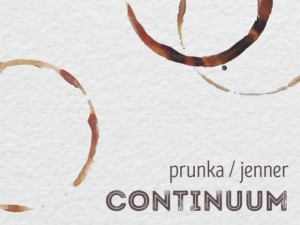 The latest from New Orleans locals Brian Prunka and Michael Jenner, known together as prunka/jenner,  is seven tracks of pleasing, generally laid-back sounds. Continuum features Prunka on guitar and Jenner on saxophone. They're joined by William Thompson IV on piano, Jesse Morrow on bass, and Geoff Clapp on drums. The record was released on October 10.

Continuum was recorded at Word of Mouth Studio in New Orleans. "There's something different about playing music with old friends, people you've known a long time and who know you," says Prunka. "It was really nice to get together with old friends for a few days and just play some original tunes. Hopefully, we captured some of that longstanding friendship in the sound of the record."

Continuum is a 7-track album that sounds like a journey through the evening and night. It starts off with the charming melody and mellow sounds of 'Folk II (Blues).' 'Night' has a calm urgency; musically capturing the moment in the middle of the night where one feels the night will go on forever-- well before witnessing the shock of the sky beginning to brighten. The wild title track, 'Continuum,' showcases Jenner's fantastic saxophone skills. The slightly bluesy 'Good Morning Andrew' eases the impact of night into day with effortless, pleasant sounds.

Prunka/Jenner's Continuum is available on CD and mp3 from the Louisiana Music Factory and Bandcamp.