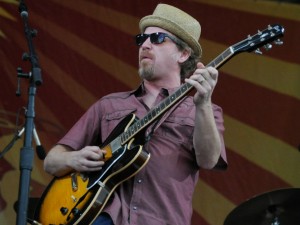 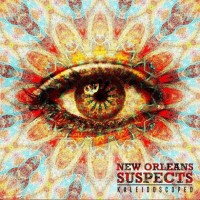 The New Orleans Suspects are a local five piece that formed in 2009 at the Maple Leaf. The five men who make up the Suspects have an impressively vast experience in New Orleans music, including time spent onstage and in the studio with the likes of the Neville Brothers, James Booker, Professor Longhair, Leo Nocentelli, and many others. Their latest album, Kaleidoscoped, pulls from funk, rock'n'roll, New Orleans brass sounds, and more for a rousing good listen.

Kaleidoscoped opens with the Caribbean-influenced 'Get It Started' before moving into the 1970s-era funk heavy 'Cocaine Jane' [video below]. The band shows their roots with the Mardi Gras Indian influenced sound on 'Round Up Dem Suspects' and 'Neighborhood Strut' and they embrace a southern rock sound on 'Creole Hannah.'

The Suspects, as a whole, have a deep resume. Drummer Willie Green also served as the drummer for the Neville Brothers for over thirty years. He has also recorded with Paul Simon, Bob Dylan, and The Grateful Dead. Bassist Reggie Scanlan has more than three decades with The Radiators and spent much of the 1970s backing up the likes of James Booker, Professor Longhair, and Earl King. Guitarist Jake Eckert studied under Duane Allman and spent years with the Dirty Dozen Brass Band, a fact that shines through on his skilled accompaniment of the horns on Kaleidoscoped. Pianist CR Gruver also performs with Leo Nocentelli and saxophonist Jeff Watkins spent 12 years with the James Brown Band and six with Joss Stone. Hear this incredible mish-mash of experience highlighted on 'You Got The Fire,' featuring numerous solos.

Kaleidoscoped is available now on mp3, CD, and vinyl from Louisiana Red Hot Records. You can buy it directly from the band or at the Louisiana Music Factory, and from iTunes or Amazon.

Catch the New Orleans Suspects live onstage at the Gretna Heritage Festival on October 9 or at the Maple Leaf on Friday, October 14 and Saturday, October 15.