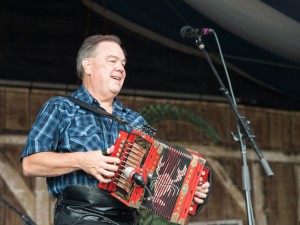 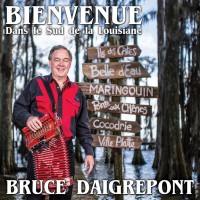 Daigrepont was born in New Orleans on July 11, 1958. His parents were part of a post-World War II migration of Cajuns to New Orleans from the rural farming communities of Avoyelles Parish. Music came to Bruce at an early age, and in the most traditional manner of being handed down from father to son. When he was growing up, no gathering was complete without a little playing and singing. His father picked the guitar "Carter Family style" while his Uncle Alton lent a remarkable voice to the traditional Cajun songs and old-time country ballads. When Bruce turned five, his father presented him with a guitar, and by the age of ten he was also on a five-string banjo. In 1978, after attending the annual Festival Acadiens in Lafayette (coming up again soon--October 13-16, 2016) that Bruce was inspired to devote himself to the French accordion. By 1980 he had his own Cajun band and was honing his skills at regular Thursday night fais do do dances at the Maple Leaf. Throughout the '80s, Daigrepont almost single-handedly popularized Cajun music and Cajun dancing in New Orleans.

The fais do do dances moved to Tipitina's in 1986 and have been happening there ever since. Read more about Daigrepont''s fascinating music career at his website.

Bienvenue dans le Sud de la Louisiane is available now on CD and mp3 directly from Bruce Daigrepont, at the Louisiana Music Factory, and from iTunes and Amazon. Catch Daigrepont and his band at the Rock'n'Bowl on Sunday, October 2 and Sunday, October 9.