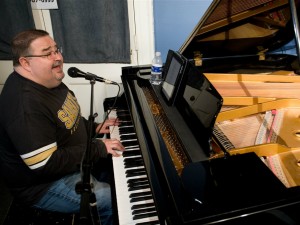 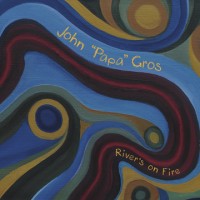 John 'Papa' Gros is a New Orleans pianist keeping the flame alive. On his latest, River's On Fire, released last Friday, Gros hits hard with the funk after a 12-year hiatus since his last solo release. Born in New Orleans, Gros has spent more than a quarter-century championing the music of the Big Easy. He’s played it all — New Orleans funk, rock & roll, jazz, blues, Americana, pop/rock — and he swirls those styles into a style that pays tribute to his influences while still pushing ahead into new territory. Gros is a proud local who carries on the tradition of New Orleans music, both honoring its past and helping to shape its future.

River's On Fire is a funk filled 11-track album. The catchy title track has been stuck in my head since he first performed it at WWOZ in March, one of many local musicians showing support for our Spring 2016 Pledge Drive. The song was just a few months old then, as Gros had written it around the 10th anniversary of Hurricane Katrina as a celebration of the city's recovery. See the video of this performance below.

Gros takes on a sweet sound with 'Sugar and Ice' and 'Two Little Angels.' 'Shaky Frank' is a steady jam and would be a solid selection for a second single. 'Cocaine and Chicken Friacassee' sounds like it flew out of 1978 but is actually a collection of anecdotes from Gros's group Papa Grows Funk’s lengthy Monday night residency at the Maple Leaf. “It’s 13 years of Monday nights rolled into one song. The good, the bad, the ugly,” Gros told The Advocate's Keith Spera. He becomes more pensive and contemplative for 'Same Old Same' and the album's final track, a vividly depressing 'This New Year's Eve.'

Though it's been more than a decade since Gros's last solo release, that was no dormant time in his career-- his focus was intense on Papa Grows Funk, a group that toured frequently, held Monday nights at the Maple Leaf, and released five albums from 2000 till they disbanded in 2013. Gros is a recognizable face for live music fans in New Orleans. In addition to solo performances and Papa Grows Funk, he also performs with Anders Osborne, Raw Oyster Cult, and the Meter Men, featuring bassist George Porter Jr., drummer Zigaboo Modeliste and guitarist Leo Nocentelli of the Meters.

Gros celebrated the release of River's On Fire with a show at Tipitina's last Friday but you can also catch him for free twice this fall-- October 8 at the newly-minted Beignet Festival in Lafayette Square and October 13 at Jazz in the Park in Armstrong Park. He also appeared live on Missy Bowen's evening Blues/R&B show on Thursday, August 25. You can hear that performance on our 2-week archive through Wednesday, September 7, 2016.

River's On Fire is available on mp3 and CD from the Louisiana Music Factory, iTunes, Amazon, and CDBaby.