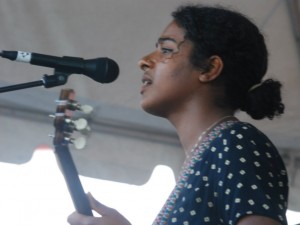 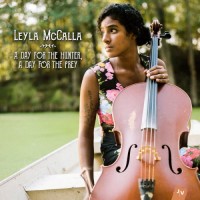 Leyla McCalla is a Haitian-American who sings in French, Haitian Creole, and English, and plays cello, tenor banjo, and guitar. Deeply influenced by traditional Creole, Cajun, and Haitian music, as well as by American jazz and folk, her music is at once earthy, elegant, soulful and witty. It vibrates with three centuries of history, yet also feels strikingly fresh, distinctive and contemporary.  Named after the Haitian proverb that also provided the title of Gage Averill’s 1997 book about popular music, power, and politics in Haiti, McCalla's new album A Day For The Hunter, A Day For The Prey explores the themes of social justice and pan-African consciousness.

'Vietnam' highlights McCalla's beautiful voice and invokes an Old World gravity with a 20th century tale of separation due to war. The light touch and playfulness excuded on 'Let It Fall' and 'Minis Azaka' provide counterbalance to a deeply emotional set of songs. The Boston Globe described the record as “at once varnished and sparse, like field recordings in high definition.”

McCalla moved to New Orleans in 2010. “I feel very at home here,” she says. “The more I learned about the history of Louisiana, its ties to Haiti and French speaking culture, the more sense of belonging I felt and continue to feel.”

In addition to her own music, McCalla has performed for two and a half years with the Carolina Chocolatedrops and played on their 2012 Grammy nominated album, Leaving Eden. A Day For The Hunter, A Day For The Prey was mostly recorded at Dockside Studio in Maurice, LA-- an area effected by the recent heavy flooding throughout southern Louisiana. (See related: "Flood Silences Renowned Dockside Studio")

A Day For The Hunter, A Day For The Prey is available now on mp3, vinyl, and CD at the Louisiana Music Factory, iTunes, and Amazon.

McCalla is touring extensively nationally and internationally for the remainder of the year but you can catch her in New Orleans at Preservation Hall on September 24.