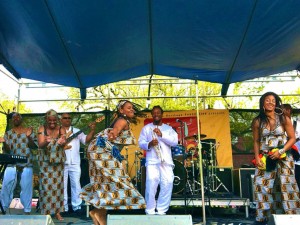 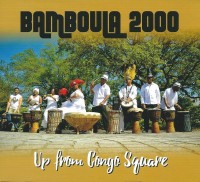 Bamboula 2000 integrates a modern soul sound with African, Caribbean, and jazz influences-- thus their latest album, Up From Congo Square, is quite appropriately titled. Bamboula 2000 pays tribute to their drumming and dancing ancestors in Congo Square's long and storied history as the birthplace of jazz and the New Orleans sound. Bamboula 2000 is unique in that they began with a specific mission-- to help people perceive the connections between themselves and the cultural traditions of the African diaspora. This mission is still being fulfilled 22 years after their launch.

Formed in 1994, Bamboula 2000 has won the Big Easy Award for Best World Music Group three times and been nominated eight times. The group is heavily invested in the community and reaches thousands of children annually through their "Imagination Tour" dance and drum workshops. Up From Congo Square was supported by the Threadhead Cultural Foundation, a local non-profit that works "to promote the tradition of preserving, promoting and disseminating the cultural heritage of New Orleans and the surrounding area of Louisiana."

Up From Congo Square is a moving tribute to and continuation of the music that came from the historic area now contained within Treme's Armstrong Park and all of the souls and influences that have passed through there over the centuries. The percussion heavy 'Our Ancestry' calls out spots throughout the Caribbean and world. Heavy African drum stylings can be heard on 'Kakilamba' and 'Drummer Man.' The group takes a lighter turn on the easy flowing 'La Place' and romantic 'Let It Happen.' The 10-track release closes with the most straight jazz song on the album, 'Elevate.'

On Sunday, August 14, they'll be celebrating the 22nd anniversary of the band with a show at Cafe Istanbul from 6-10p.

Up From Congo Square is available on CD and mp3 from the band's website, Louisiana Music Factory, CDBaby, iTunes, and Amazon.