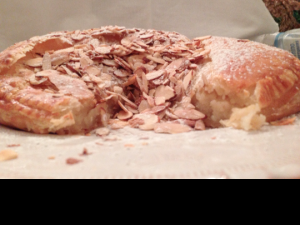 The King Cake made its first appearance at a Mardi Gras ball in 1870, which the Twelfth Night Revelers hosted at the New Orleans Opera House. They wanted to use the bean hidden in the cake to choose the first Mardi Gras queen. As Mardi Gras parties go, this one devolved into debauchery. The krewmen tried to distribute pieces of cake on the ends of their spears. According to The Lords of Misrule, “if any lady found the broad bean, she never admitted it.”

France used beans as King Cake trinkets until the 1870s, when the bean was replaced with a porcelain figure. In New Orleans, we switched to the plastic baby in 1959. Our king cakes are similar to the brioche-based cakes of southern France.

In the northern part of France, carnival revelers eat Galette de Rois on Twelfth Night. It is made of puff pastry and a mixture of almond cream and pastry cream.

While an adult slices the cake on top of a table, some traditions have that a child, usually the youngest, sits under the table and calls out the name of the recipient of the next slice of cake. That insures that the recipient of the bean, baby, or other trinket is completely random. The lucky recipient becomes king or queen for the day. That person can place the crown on the head of another party-goer, giving that person royal status as well.

Place the milk in a medium, heavy bottom saucepan over medium-high heat. Split the vanilla bean lengthwise and scrape the seeds into the pot. Place the pod in the pot as well. Once the milk reaches a boil, turn off the heat, cover the pot, and allow set aside for 10 minutes to one hour. Remove the vanilla pod.

Meanwhile, combine flour, caster sugar, and salt in a bowl. Add the butter and eggs.

Drizzle some (about ¼ cup) vanilla milk into to the flour mixture, stirring constantly.  Then, pour that mixture back into the saucepan and gently warm over medium heat, stirring constantly to prevent sticking, until the mixture thickens and coats the back of a spoon. The mixture should be smooth. If you notice lumps, strain them out.

Remove from heat and chill in the refrigerator eight hours or overnight.

Working on a floured surface, roll out each piece of puff pastry to 1/8 inch thick. Using a pot lid, round plate, or cake pan to trace and cut a 9-inch circle from each piece of puff pastry. Place one round on a parchment paper lined sheet tray. Brush the edge with the beaten egg. Place the almond meal/pastry cream mixture in the middle of this pastry round. Spread this out evenly until you get to the painted border. Place the fava bean or other trinket in the almond mixture.

Cut a small vent in the middle of the second round and place over the first one. Secure the edges with a fork or your fingers. If you don’t secure the edges, the filling will spill out while it is cooking. Brush the top of the galette with beaten egg.

Now, with the back of your knife, trace a design in the pastry, being careful not to cut all the way through it. Popular designs include a criss-cross pattern or a “c” pattern coming out from the center. An internet search should provide some inspiration.

Loosely cover the galette and refrigerate for two hours or overnight.

Preheat the oven to 375 degrees Fahrenheit.

Bake the galette until puffed and golden, about 25 minutes.

Let the galette cool completely. If you like, sprinkle it with powdered sugar and sliced almonds, and top it with a crown, just before serving.

"This Galette des Rois recipe is very basic and good just the way it is. However, it is basic enough that you can get creative with it - there is no reason the restaurants and bakeries should have all the fun. You could melt some dark chocolate into the pastry cream, use orange blossom water or another alcohol to replace the rum, or switch the almond meal out for hazelnut or another nut. I like to top mine with toasted almonds and powdered sugar."