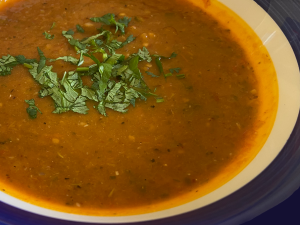 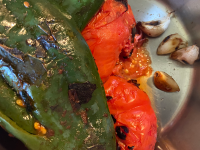 Just in time for Creole tomato season, this summer soup is excellent served at room temp. The recipe employs a technique from Oaxaca, Mexico, griddle roasting, to develop deep flavors. The soup is vegan (unless you use chicken broth instead of vegetable). It's pretty spicy, but if you really like the heat, add the optional chipotle.

It's also pretty rustic, with tasty little charred bits from the griddle roasting. You could make a more refined version if you strained the soup after pureeing.

As alternatives, instead of the griddle roasting method presented here, you could char the vegetables outdoors on a gas grill, or in the oven under a broiler.

The recipe below makes a smallish batch (3-4 servings). You can easily double it.

Using a large heavy pan (or stove-top griddle), our first task is to char the exteriors of the peppers, garlic, and tomatoes. Start with the garlic and peppers in the dry pan over medium high heat. Turn frequently. When the unpeeled garlic cloves are soften and lightly charred (6-8 minutes), remove them from the pan. The peppers will probably take a bit longer; when the skin is well blistered and charred, remove them to a paper bag and close it to steam the peppers and facilitate scraping off their skins.

We do the tomatoes last, because they're a bit messier. Add the tomatoes to the pan and lower the heat to medium. Repeat the procedure above, turning the tomatoes frequently (and gently) to keep the skins as intact as possible. Remove the tomatoes to a bowl to catch juices when they are well blistered and charred, 10 minutes or so.

Add the olive oil to a soup pan over low heat. Add the onions and cover. Stir occasionally, until the onions have softened, about 5 minutes. Uncover, add the cumin, and cook for another minute or so until fragrant. Then add the stock, increase heat and bring to a simmer.

Remove the garlic from its peels, mash it up a bit and add to the pan containing the broth/cumin/onions mixture. Scrape as much charred skin from the tomatoes as you can, break them up with the back of a spoon, then add them (and their juices) to the pan (no worries if some little charred bits get into the soup--they help make it delicious). Finally, remove the peppers from the paper bag and, when cool enough to handle, scrape the charred skin off, remove the stem and seeds, coarsely chop and add to the pan.

Add salt and pepper to taste. Add the chopped chipotle, if using. Cover and cook on low for about a half hour, until the onions are very soft and the tomatoes disintegrate.

Allow the soup to cool enough to handle safely, then puree with an immersion blender, or in batches in a regular blender.

Return to the pan, add lime juice and heat as desired. Adjust salt and pepper, ladle into bowls, sprinkle with cilantro then serve.