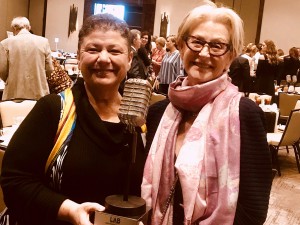 For WWOZ, the awards and accolades have been wonderful and inspire us to get better and better. Here are some of the latest.

The 2018 Prestige Awared for Station of the Year - Major Market Radio from the Louisiana Association of Broadcasters.

“Best Radio Station 2017”  by the readers of Offbeat magazine

“Best Radio Station 2014”  by the readers of Offbeat magazine

“Station of the Year” among medium-sized markets in the U.S. by JazzWeek magazine

In June 2011, JazzWeek magazine presented awards in 14 categories at the JazzWeek Summit. The JazzWeek Summit is a gathering of radio programmers, record labels, promoters, musicians and others interested in jazz radio promotion and programming. For the mid-sized market, the 2011 Radio Station of the Year is WWOZ, New Orleans. Now how about that? Thanks, everyone!

In June 2008 WWOZ also won the JazzWeek award for the 2008 Radio Station of the Year in a mid-sized market! Thank you!

The readers of Gambit Weekly have recognized WWOZ with two gold medals in their annual "Best of New Orleans" Awards. WWOZ took top honors as the Best Radio Station, and WWOZ's own DJ Soul Sister was voted Best DJ/Electronica Artist. This is what Gambit had to say about WWOZ:

"It's been more than 25 years since Andy Warhol called WWOZ the greatest radio station in the universe. Back then, the world couldn't hear 'OZ. But now its webcast is a daily beacon of New Orleans music to the world. As far as the local community is concerned, it may be the only radio station, given that it plays local music and supports local musicians like no other. And if you can't make it to Jazz Fest or other big festivals, 'OZ is on location keeping you tuned in to the best shows and the best local music."

Read more about the "Best of New Orleans" Awards

Rolling Stone magazine in their May 2008 issue that featured “The 125-Plus People, Places and Things Ruling the Rock & Roll Universe,” named WWOZ one of the top 5 radio stations in the country. Rolling Stone said about WWOZ: "This listener-supported New Orleans station celebrates the city’s glorious musical heritage, focusing on jazz, soul, blues and Cajun music.” (May 1st issue, p. 38!)

WWOZ was awarded a 2008 Esquire Esky award for Internet Radio Station of the Year.