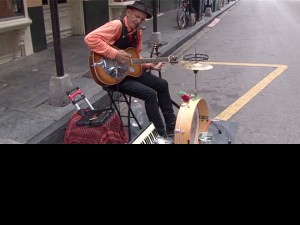 A self-taught musician who left a troubled home at an early age, Brian Belknap thumbed cross country making what he could playing on the streets. Finding factory work, he honed his skills practicing in boiler rooms and on loading docks during lunch breaks, organising when he could against the horrible working conditions he often found himself in. The sensitivity to the plight of those living on the margins of society is evident in Belknap's songs and is ultimately what led him to leave music to devote his time to the struggle for social justice.

Ironically, his return to performing came when he was forced out of his rent controlled apartment in the San Francisco's Mission District. He started playing on the street again to help make ends meet.

You can find Brian Belknap playing throughout San Francisco and seasonally on Royal Street.