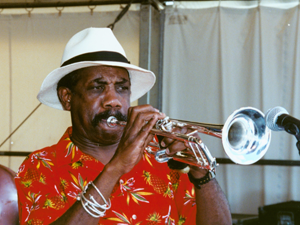 Warren "Porgy" Jones, circa 1998, courtesy the Archives of the New Orleans Jazz & Heritage Festival and Foundation.
WWOZ was very sad to learn of the passing of New Orleans R&B and jazz trumpeter Warren "Porgy" Jones on August 21, at the age of 74.
He grew up in the French Quarter, and was a student of the legendary music educator Yvonne Busch.  By the time he was in high school he was performing with such New Orleans R&B greats as Johnny Adams, Lee Dorsey, Eddie Bo, Tommy Ridgely, and Ernie K-Doe, and was on recordings produced by Cosimo Matassa.
After leaving New Orleans for New York, he became a successful session musician and sideman, and appeared on records by Ray Charles, Jerry Butler, Marvin Gaye, Groovesect, Gladys Knight, Curtis Mayfield, Otis Redding, Smokey Robinson, the Temptations, and many others.  He performed around the world, and toured with the Red Sanders Big Band, Ray Charles, the Slide Hampton Band, and Art Blakey, among others.
As recently as last year, he performed at the Jazz Journey event at Dillard University, produced by the New Orleans Jazz & Heritage Foundation.
A visitation and musical tribute will be held Friday, August 29,from 4-7 pm at the Charbonnet Labat Funeral Home, 1615 St Philip Street.  Visitation will also be held on Saturday, August 30, from 10:30-11:30 am, with services then beginning at 11:30 from the funeral home.  A traditional jazz funeral procession will follow.
Topic tags:
In Memoriam