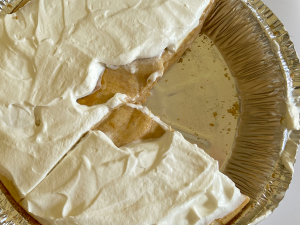 Here's a way to be true to holiday tradition (it's a pumpkin pie!), while upping your holiday pie game with something different.

Per, Wikipedia: "A chiffon pie is a type of pie that consists of a special type of airy filling in a crust. The filling is typically produced by folding meringue into a mixture resembling fruit curd ... that has been thickened with unflavored gelatin to provide a light, airy texture...."

The whole pie can be frozen, prior to adding the whipped cream in the last step. Thaw and add freshly whipped cream when you're ready to serve.

Substitute pre-mixed pumpkin pie spice if you have it, just make sure to taste the filling and adjust as necessary. And use your own pre-baked pie crust if you like, graham cracker or otherwise.

Dissolve the gelatin. Add the envelope contents to 1/4 cup cool water and allow to stand for a few minutes or so.

Add 2/3 cup sugar, cinnamon, nutmeg, and salt to a sauce pan. In a small bowl, mix egg yolks and milk, then stir into the sauce pan.

Cook over medium heat stirring frequently, until the mixture thickens slightly, about 5 minutes or so. Don't allow the mixture to reach a boil.

Add the pumpkin, stirring to combine and cook briefly, a minute or two.

Remove from heat, then stir in the gelatin/water mixture until well combined.

Fold the pumpkin mixture and egg whites together, then place the resulting mixture into the crust.

Chill until the pie sets up.

Before serving, whip cream to soft peaks, add the vanilla and powdered sugar, then whip to the consistency you like.  Spread the whipped cream in a thick layer over the pie.