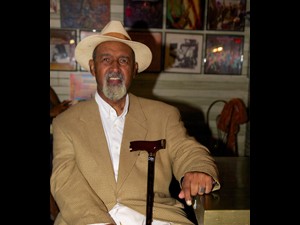 Idris Muhammad. Photo by Paul Punzo.
Idris Muhammad, born Leo Morris in New Orleans' 13th Ward, passed away in Fort Lauderdale, Florida on Tuesday morning, July 29th.  He was buried the same day, following Muslim customs and traditions.  He was 74.  We will remember him as a gigantically productive and gifted drummer and musician.

Almost 18 years ago, I learned about Idris’s music by listening to the late Don “Moose” Jamison during his Tuesday afternoon Jazz from the Park Show in Armstrong Park. Right away I was awed by Idris' playing and compositions.  Little did I know that I would get to meet Idris in person thanks to David Murray, Kidd Jordan and Don Paul.
Idris was unique and eclectic in the recordings that he played on. He made hit Top-40 records with Sam Cooke, Joe Jones, Jerry Butler, Curtis Mayfield and the Impressions, and Roberta Flack. From the mid-1960s onward, he also played with giants of jazz:  Pharoah Sanders, Grant Green, Ahmad Jamal, John Hicks, Randy Weston, David Murray, Joe Lovano, and John Scofield.   In the 1970s he was the leader of several great LPs--Black Rhythm Revolution,  Rhythm And Peace, Power Of Soul, working with engineer Rudy van Gelder and another tight-knit galaxy of stellar musicians: Grover Washington,  Bob James,  Randy Brecker, Ron Carter, and many more.
Idris, with all the candor and humility that most masters possess, attributed his success as a drummer to the gift of being able to “…hear what a song needed….”  We shared a wonderful 2 1/2 hours with him on WWOZ, one Wednesday evening in February 2013, when Don Paul brought Idris to my Jazz from the French Market Show.
Idris graced us with more good stories, insights, and laughs than can be remembered.  You'll hear his warm voice talk about many things.  How Art Neville gave him his first gig and how they traveled to it in the Neville’s' station wagon. Also, you’ll hear how he got his high-hat sound from the steam press of dry cleaners.   He’ll tell you about how a log drum surprised him on the stage of the Broadway musical "Hair."  He’ll also share what his mother's and father's love meant to him.
Thank goodness for the technology that allows us to capture moments such as these!  And thanks to WWOZ for providing a platform where the architects of New Orleans music and culture can share their gifts with the whole world. Thanks in particular to Russell Shelton, my colleague, for his beautiful edit of the conversation.
Topic tags:
In Memoriam