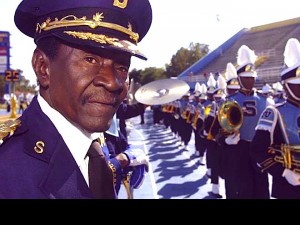 During Dr. Greggs' tenure, the Southern marching band became known as the "Human Jukebox" and played at six Super Bowls, four Sugar Bowls and three presidential inaugurations. Dr. Greggs retired in 2005, and was inducted into the Louisiana Black History Hall of Fame in 2013.

"Dr. Isaac Greggs was a visionary, who created a marching band - the Human Jukebox - that constantly set the standard of greatness for all college marching bands. He poured his heart and soul into every performance. With Dr. Greggs, perfection was the only outcome he accepted."

"The true testament of his leadership is reflected not only in the number of his students who have become band directors and musicians of note around the country, but the multitude of former band members who, through the dedication and commitment instilled in them by Dr. Greggs, became leaders in their respective chosen careers outside of music."

A viewing is set for Friday, May 2, at 3:00 p.m at the F.G. Clark Activity Center on the Southern University campus, followed by a memorial service at 6:00 p.m.

You can read more about Dr. Gregg's legacy here at nola.com and here at theadvocate.com.