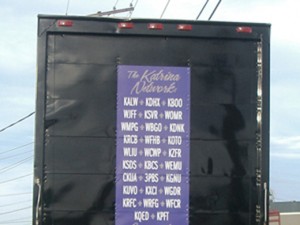 The "Katrina Network" on the back of the WWOZ broadcast truck

In the months following the failure of the federal levee system in New Orleans, a group of 31 community radio stations from around the world lent a much-needed hand as WWOZ struggled to stay on the air.

In November 2012, in the aftermath of Hurricane Sandy, the Katrina Network helped WFMU, a community radio station in Jersey City, NJ.