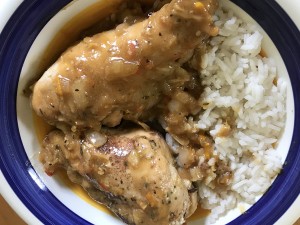 This is an old-school version of fusion cuisine, with its roots in Jamaica's Chinese community. It has a sweet-savory Asian flavor profile, with a big hit of Caribbean heat. It includes a number of common Jamaican ingredients like allspice, thyme, ginger, and scotch bonnet (habanero) peppers, and the classic Chinese orange/soy sauce combination.  You can find versions in Enid Donaldson's The Real Taste of Jamaica (2000) and Lucinda Scala Quinn's Jamaican Cooking  (1997).

It's actually more of thick sauce than a glaze, and you'll want rice alongside.

In a small bowl or measuring cup, combine the juice from the oranges and their zest, the grated ginger, soy sauce, marmalade and water. Whisk for a few seconds and set aside.

Use the 2 tablespoons of oil and flour to make a caramel-colored roux. Set aside.

Dry the chicken parts with paper towels. Add the allspice, thyme, salt, and black pepper, then stir to distribute evenly.

Heat the 1/4 cup of olive oil in a large skillet over medium high heat. Brown the chicken on both sides, then remove and set aside.

Carefully spoon out some of the oil from the pan, leaving about a tablespoon in which to saute the vegetables. Add the onions, garlic, and chile pepper. Cook over medium heat until the vegetables are softened, 3-4 minutes or so.

You're done when the chicken is cooked and the sauce is thickened to your liking. Serve over white rice.