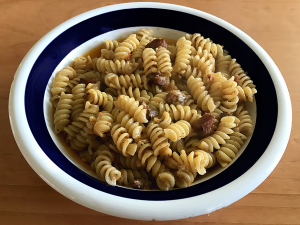 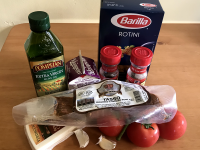 Tasso--cajun cured pork shoulder--has great flavor that works well with a rich sauce, as in this pasta recipe, which also includes tomatoes, cream, and Pecorino-Romano.

Note: Some tasso is sold with a layer of spice mix caked on the outer surface, as described in the procedure below. Other tasso, though seasoned, doensn't have spice mix on its exterior. If you're using the latter variery, consider adding a teaspoon or two of you favorite spice mix when you add the garlic.

Bring water to a low boil in a small saucepan. Cut a small "X" in the end (opposite the stem) of each tomato, then immerse the tomatoes in boiling water for about 45 seconds. Remove from water and allow to cool. Remove the peels, which should easily slough off, and core the tomatoes. Place in a bowl to catch juices and set aside.

Chop the tasso to 1/4 to 1/2 inch pieces. Put the tasso and and any associated seasoning mix in a pan over medium heat. Let the meat brown a bit in the dry pan, for about 10 minutes or so. Stir, and reduce heat if necessary to prevent burning the spice rub.

Add butter and olive oil. When the butter has melted, add garlic and cook slowly, stirring, for several minutes. Then add oregano, chile flakes, and black pepper. Stir to combine and cook for several more minutes.

Add the tomatoes and their juices. Mash the tomatoes with the back of a fork to break them up. As they cook, they'll break down. Help them along by mashing-and-stirring every few minutes. Make sure any fond that formed while browning the tasso gets scraped up and incorporated into the sauce.

Add some salt. Taste and adjust seasoning and heat level. Simmer until the tomatoes break down, continuing to assist with the back of a fork as necessary. When the tomatoes are well dissolved, add the cream, raise heat and reduce.

Meanwhile, cook the pasta according to package instructions.

When the pasta's done, drain it, add the sauce, stir thoroughly, then add the cheese and stir again. Cover for a minute to allow melting, then it's ready to serve.