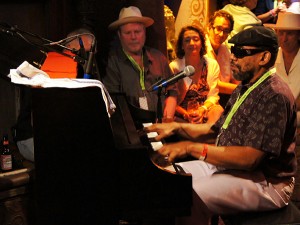 The videos range from a few minutes to over an hour in length.  For the most part, they combine explanation/lecture with demonstration/playing the music.

A number of the pianists are regular performers at Piano Night.

Here's a lecture/performance (56:13) by Tom McDermott, recorded at Tulane University in July 2012. It's pretty long but rewards the investment of time.

Next, Henry Butler talks to Loyola University New Orleans students and performs on stage in 2011 (57:10).

We have two videos featuring John Cleary, first a short (7:48) clip on the history of New Orleans piano playing, from Robert Mugg's 2006 documentary Music in Exile.

Cleary delivered the seminar below (1:07:14) on the history and tradition of the New Orleans blues piano style to an audience at Loyola University, New Orleans in 2012. He discusses major figures like James Booker, Professor Longhair and Jelly Roll Morton, and places their work in the larger context of the musical traditions of the Caribbean rim. (Note: this video was recorded at low levels, so you'll likely have to turn up the volume.)

Here's a shorter piece, a clip from the film Piano Players Rarely Ever Play Together, a documentary portrait of three great New Orleans pianists (Tuts Washington, Professor Longhair and Allen Toussaint) and how they influenced one another's music. This clip features the latter two.

If you'd like to share other material about the New Orleans piano tradition--video or otherwise--please tell us about it in the comments.