Tipitina's: Why the Banana? 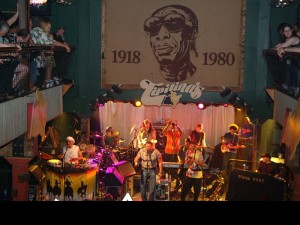 Neville Brothers in front of the Longhair mural at Tipitina's. By Leon Morris.

This month Tipitina's is celebrating its 35th Anniversary. This famous New Orleans venue opened its doors in 1977 when a group of 14 Tulane alumni and students (the "Fabulous Fourteen") pooled their money to buy a club where New Orleans musical giant Professor Longhair could perform -- he had burned too many bridges in the French Quarter, and was out of venues where he could play. So the Fabulous Fourteen opened Tipitina's Uptown on Napoleon and Tchoupitoulas, where the Professor played for the last three years of his life.

A very important FYI: Tipitina's plays a critical role in WWOZ's history. Our first broadcasts in 1980 were from a cramped apartment above Tip's. WWOZ's tradition of bringing live, local music to the airwaves began when DJs would drop a microphone through a hole in the floor to record performances from Tip's stage.

Now, 35 years later, after thousands of shows, a change in ownership, and the incredible development of the Tipitina's Foundation, one question remains: why, oh why, is that banana on Tipitina's logo?

We started doing some digging and, as it turns out, there is no one clear answer to this quandary. Many rumors are circulating, some clearly not true.  But they all have a place in Tipitina's lore:

Legend #1: The artist who created the Tipitina's logo signed all of her work by dipping a banana into paint and using it as a brush to leave her mark. While we can't say for certain this never happened, there is a framed logo upstairs at Tipitina's bearing the artist's signature - definitely not a la banana.

Legend #2: This was the '70s and yoga was all the rage. The Fab Fourteen knew a Swami with a name that rhymed with banana, and they simply called him Swami Banana. The Swami didn't last, but the joke did when it was worked into the Tip's logo.

Legend #3: Tipitina's is named after a Professor Longhair song called Tipitina (known fact). The song is supposedly about a French Quarter woman with no toes who was, quite literally, "Tippy Tina." Rumor has it that Tina had a fruit stand in the Quarter, and the banana is another allusion to the song and an homage to Tippy Tina herself.

Legend #4: The club was originally called Tipitina, but the artist who conceived of the logo added the "'s" and the banana, just because it felt aesthetically right to her. The Tip's owners liked the "s", but not the banana. Unfortunately for them, the artist said it was a package deal: no banana, no "s". In a take-it-or-leave-it sort of deal, Tip's took the banana.

Legend #5: While an apple a day might keep someone healthy up north, down here in the northernmost city of the Caribbean, a saying that the Fabulous Fourteen used to toss around was "a banana a day keeps the doctor away."

Legend #6: The Fab Fourteen couldn't get a liquor license when Tipitina's first opened its doors, so instead they served juice and other health snacks -- including bananas.

Legend #7: Tipitina's used to be a banana warehouse. This one is possible. By the looks of it, Tipitina's was previously a warehouse. It's near the Uptown shipyards, and New Orleans was a major banana port.

Have you heard another version of the story? If you do, please leave a comment and let us know!

A huge thanks to Barrett DuPuis and Adam Rivas (long-time Tipitina's employess) for their banana research.

According to Blake Pontchartrain with Gambit:

Tipitina's logo was the clever creation of designer Kathleen Joffrion, a graduate of Louisiana State University with a degree in fine arts. It was late in 1976 when she was asked by Hank Drevich, the club's co-founder, to design a logo.

When Tipitina's opened on Jan. 14, 1977, it included a juice bar. And for reasons known only to them, bananas held an important place in the hearts and stomachs of the founders, who also enjoyed doling out phony money they called "kwazolas." The familiar phrase "In God We Trust" was replaced with "Eatabananatoday."

Joffrion wanted to use the juice bar/banana idea in her logo. She has said, "It was supposed to be a logo for a bar that specialized in reggae music with a juice bar. So I had a banana in the guy's hand. I combined a hand with the letter 'T' and it looked like a shirt sleeve, and it was holding a banana."

But in designing the logo she made a mistake, which remains today. It seems that Joffrion added an apostrophe 's' when she included the name of the bar in her logo. Since the club was named Tipitina, the owners demanded that she remove the offending 's.' When she explained that the logo looked better with the 's,' they allowed it to remain.

Many believe that if Professor Longhair had not existed, there would have been no Tipitina's. Indeed, the club that opened at 501 Napoleon St. and named "Tipitina" after a song made popular by Henry Roeland Byrd, a.k.a. Fess, was meant to be a showcase for a musician who would, by the time of his death on Jan. 30, 1980, become one of the most popular and revered musicians in New Orleans. And that's saying a lot.

Part of the fun of the Krewe of Fo'Teen is that there were 18 of them.

And at one point it was a banana warehouse, and they were a juice bar in the early days.

What about the rumors of KKK meetings in the back when it was the 501 Club?

And did anyone tell you about what they used to store in the back rooms where the Wild Magnolia and Wild Tchoupitoulas and Golden Eagles got dressed before shows? I'll never tell...