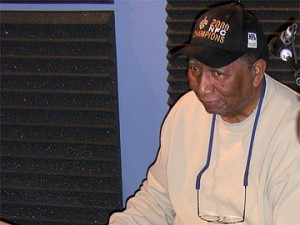 It is with great sadness that we mark the passing of Robert "Bob" French, a top-notch New Orleans musician and an irreplaceable member of the WWOZ family.

A Viewing and Service will be held on Saturday, November 17, from 1-3 PM at Rhodes Funeral Home, 3933 Washington Avenue, New Orleans.

French was a third-generation musician and the son of New Orleans banjo player Albert "Papa" French. At Papa French's passing in 1977, Bob took over his position as leader of the Original Tuxedo Jazz Band, New Orleans' oldest continually working jazz band, for which he had been playing drums. Not only was French's father a musician, but his grandfather was a tuba player and his uncle a trombonist. At the age of 15, French was in a band that also included Art Neville, Charles Neville, and James Booker.

Over the course of his long career, French recorded with a host of New Orleans musicians, including Dave Bartholomew, James "Sugarboy" Crawford, Fats Domino, Clarence “Frogman” Henry, Earl King, Ellis Marsalis and many others.

French was an influential and much-admired host of “French Cooking” and other shows on WWOZ featuring New Orleans music.

French's place in the New Orleans music community was not limited to that of a musician and show host; he also mentored young musicians. The 2007 recording “Marsalis Music Honors Bob French”, released on Marsalis Music/Rounder Records, was a collaboration with friends and former protégés including Harry Connick, Jr., Branford Marsalis, and Trombone Shorty.

I do hope you're considering having Sally Newhart come on and talk about Bob, the band and it's long history. She was a great friend of Bob's and has compiled a lot of history about the French family and the band. I think you're listeners would love to hear a truly fitting tribute to Bob.

Bob French Was A Generous Mentor

Bob French not only mentored many young musicians here in New Orleans, he also was kind and helpful to new deejays.

After the "storm" WWOZ was in dire need of new show hosts. Bob took it upon himself to patiently give me pointers as I learned how to sit in for show hosts who were unable to immediately come back.

Bob was always a loyal friend and at times an honest and frank curmudgeon.

He truly loved New Orleans, its musical heritage and his fellow musicians.

He was kind to his fans, once indulging me 45 hilarious minutes after his Monday night gig.

His radio show, equal parts music, personality, and community, made 9AM bearable, at least Tuesdays and Fridays.

Please consider releasing his past radio shows as podcasts sold to benefit his family and 'OZ. I'd buy them.

He will be missed.

I'd definitely buy them too. I miss hearing his voice.

tuesday and friday mornings of Bob's shows during his tenure were dedicated blocs of "time out" from my daily toils.....oh what gems of real life senerios with "tell it like it is" commentary by Mr French and his guests....that morning he had Dr.John on who was in typical form of "who cares what they think, its the dam truth!!!! " it was a double barrel shot of real-ness.....the cultural historical gems he shared was an audio-philes dream class....it'll be a guarenteed large time for all in presence where-ever his soul gets to rest, i'll tell ya that ole padnah...

Bob died yesterday and at first, I did not realize the loss we had experienced. I guess I was still seeing him behind the drums, taking a drink and philosophizing. I met Bob on a gig like so many of his fans. I had heard him on OZ and I decided to introduce myself to him the next opportunity I got. That was in 1998. In 1999, my Mom died, I was diagnosed with breast cancer and the guy I thought I was dating…ended our relationship. ( always a man in the scenario). So turning on OZ and listening to Bob was a source of sunshine. We became friends. He always acknowledged me whenever he saw me at a gig, a second-line, Jazz Fest, or a funeral.
He knew I was always taking pictures of musicians and he would make it a point to have musicians pose for me. He introduced me to so many musicians; among them was Smokey Johnson…”Ain’t My Fault”.
He was just a funny, round the block guy, who spoke the truth and shame the devil.
During the aftermath of Katrina, I decided to publish my book, The Last Walk, and I dedicated it to Bob. I had to track him down, but we met at Donna’s in December, 2005 and I gave him a bunch of books. He was elated because he did not realize that I had dedicated the book “to all the musicians of the city, especially, Bob French.”
We are going to miss you , Bob, but whenever your name is spoken your spirit will live within us.

I loved listening to Bob. He was funny, irreverent, smart, and told it the way he saw it.

A truly kind and generous man

I met Bob just once, but he made a wonderful impression on me. After listening to him on the radio for years, I came to New Orleans and saw him perform at DBA. He signed my CD and then invited my friend and myself to stop by the studio next day. After the show, he gave me 12 of his own CDs to take home.

To me, Bob will always be New Orleans. His charm, humor and hospitality will remain with me as symbols of what a great place the city is. I've missed him ever since he stopped doing his show and I'll continue to miss him.

I am so sorry to hear about the passing of Bob French. He was one of my all time favorite show hosts. He certainly was at the heart of Traditional New Orleans jazz. And his online chatter was always fun to hear. He will be sorely missed by many.

In 1979 Bob and one of the many configurations of his Original Tuxedo Jazz Band skipped out of their paid gig at the brand new Hilton Riverside Hotel's jazz brunch to stop by my wedding reception. Bob was one of the first people I met after moving here permanently in 1977.
Now he can finally Rest in Peace...
and I have another angel in my personal 'Heavenly Band'.
Thanks for everything, Bob!

May he rest in peace.

Bob French was a dear friend of mine. I met him in the 70's when he had Tradition Hall. It was at the corner of Orleans and Bourbon Streets. The Tropical Isle is there now.
My friends and I used to hang out at The Polack's Place (Tricou House, 711 Bourbon, etc.)less than a 1/2 block from his place. At that time Wendell Brunious and Freddy Lonzo were up front and VERY YOUNG. Several of the Adams family members played and other musicians would 'sit in'. Admission was free and there was no bar. Entrants were expected to tip for each song. The only problem with that was that tourists didn't know the names of the songs that they liked. Between sets, Bob would come over to the bar and round up my friends and I to come and holler out the names of songs and put a few $$ in the HUGE tip jar. At the end of each set there would be a big Second Line to the tune of 'When The Saints Go Marching In'. Wendell would give someone the umbrella and start dancing right out into the street. It was great! Then when my husband and I got married (on a small balcony above 711 Bourbon)Bob and The Original Tuxedo Jazz Band (who had started a day gig on Saturday's playing for the Jazz Brunch at the brand new Hilton Riverside)took a long break in their tuxedo's to perform at our surprise reception, gratis. We passed a hat and came up with a couple hundred $$. He was an amazing gentleman and friend. We will all miss him dearly. Thanks for introducing me to Pete Fountain, Bob! Loveyou much. You may be gone but never forgotten!