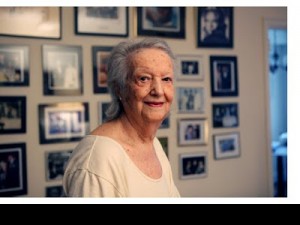 Also get out to Satchmo SummerFest, August 3-5!

We, at WWOZ, wish to add our expression of recognition to those honoring Ms. Phoebe Jacobs at this time of her passing. Her work on behalf of one of our most beloved native sons—Louis Armstrong—will always be deeply appreciated by those of us who feel blessed by his cultural legacy.

Whenever she journeyed to New Orleans, Ms. Jacobs would visit with us here at WWOZ. She let us know how important she felt the station was to those very same causes to which she had dedicated her life. We were all in this together. So, we remember her fondly and with gratitude for her life on this earth.

A memorial concert celebrating the life of longtime jazz advocate Phoebe Jacobs—who died April 9 at age 93—will take place at 1 p.m. on May 24 at Jazz at Lincoln Center’s Frederick P. Rose Hall in New York.

The “Tribute to Phoebe Jacobs, In Memoriam” program will feature the Jazz at Lincoln Center Orchestra with Wynton Marsalis as well as Jimmy Heath, Jon Faddis, Lew Soloff, Mercedes Ellington, Bobby Sanabria, Antoinette Montague, Robert O’Meally, Victor Goines, Bob Stewart, Stanley Crouch, George Wein, Norma Miller, Brianna Thomas and others. Immediately following the program will be a second-line procession along Central Park South. The event is free to the public, and attendees will be seated on a first-come, first-serve basis starting at 12:30 p.m.

A highly influential behind-the-scenes figure in jazz, Jacobs was best known as a publicist for such prominent musicians as Ella Fitzgerald, Sy Oliver, Peggy Lee, Sarah Vaughan, Duke Ellington and Della Reese. She worked closely for many years with Louis Armstrong and assisted in organizing the Louis Armstrong Educational Foundation, where she served as executive vice president. After Armstrong’s death in 1971, Jacobs continued to promote his legacy, and her efforts and influence helped establish the Louis Armstrong Center for Music and Medicine at Beth Israel Hospital, the Louis “Satchmo” Armstrong Summer Jazz Camp, the Louis Armstrong Archives at Queens College and the Louis Armstrong House Museum.

Jacobs worked tirelessly to provide scholarships to high school and college students through various non-profit organizations, and she was instrumental in launching the Jazz for Young People Concert Series at Jazz at Lincoln Center. In 1989, she helped establish the Jazz Foundation of America, a non-profit organization that provides support to musicians in need.

Jacobs discovered her love for jazz as a young woman and began working as a hat-check girl at the Manhattan jazz club Kelly’s Stable at age 17. She went on to work as a promoter and contractor, serving as director of public relations and producer of special events at the Rainbow Room at Rockefeller Plaza, where she was responsible for the appearances of many prominent entertainers. Early in her career, Jacobs also worked for Decca Records and the club Basin Street East.

In lieu of flowers, donations may be made to the Louis Armstrong Educational Foundation online at louisarmstrongfoundation.org