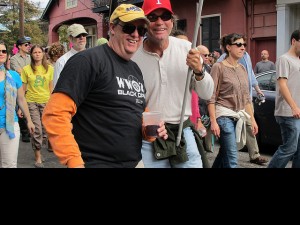 Frank carrying an 'OZ flag at the second line with CFO Beau.

Frank Wills and I - close up.jpg 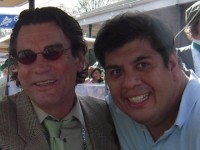 Frank and I during the St. Patrick's Day Parade in the Irish Channel 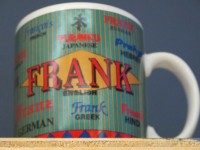 Frank's mug on the shelf. 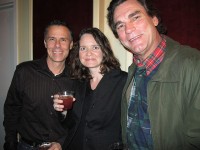 Frank with Eric and Kerry at the 'OZ birthday bash.
For details on visitation and mass, see below

Frank called me on Thursday morning, “Jorge, I am sorry I cannot make it to ‘OZ, but I’ve gotten busier at work.” He also mentioned he was going to miss his regular volunteer time the following week because he was headed to the West Coast. That was the last time we spoke.

I found out about his death on Saturday. Apparently, my good friend died in his sleep sometime before Friday morning.

Lately, he’d been working as a driver and tour guide, and seemed to enjoyed what he was doing. Frank was a person who seemed to enjoy everything he became involved with.

I now have to speak about him in the past tense but Frank, to me, is still here. He was a reliable volunteer at the station. Frank quickly took a liking to recording “spots,” the announcements that we play on air at the station. I liked to use his voice because he had natural delivery and an unmistakable New Orleans accent.

He’d mentioned to us that he helped at an animal shelter, but he never mentioned that he was also heavily involved in his church. A close friend of his told me he used to help with bringing the Eucharist to elderly members of his parish who could not come to church.

Frank was also a major league baseball player, a fact that we found out only later as we got to know him (and which finally explained why he took to the spotlight so naturally). But that is his nature: unpretentious, friendly, and always willing to serve. There is something classic about Frank--his good manners, his sincerity, his sense of humor.

There is a mug he brought into the office with his name on it, a present from someone. He couldn’t find it in the kitchen one day and decided that, after he had found it, he would store it in my office, instead of leaving it in the pantry with the other dishes. A private man, Frank paid attention to details like that. And It may seem like a little thing, but I will make sure his cup stays in its current place for as long as I can keep it there.

I miss my buddy, and WWOZ misses him too.