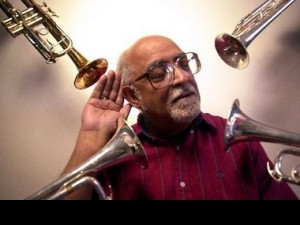 WWOZ volunteer, Ron Walton called the station on Tuesday morning a little before 9:00 a.m. and informed us of Wardell Quezergue’s passing. Ron shared a long and deep friendship with Wardell, and facilitated his visits to the studio when K. Balewa, host of the Wednesday morning jazz show, began interviewing some of the key elders in the New Orleans music scene for archival purposes almost two years ago.

We will treasure our memories of “the Creole Beethoven” at WWOZ. The mark of his exceptional talent impressed our consciousness the way a rare and complex fragrance leaves a trace wherever it travels in both obvious and obscure spaces. For example, I often think of Wardell’s “Three Tenors for Moose” which he composed as a tribute to the late, WWOZ Monday New Orleans Music Show Host, Don “Moose” Jamison. Moose always used it as his theme song when the station was housed in the old kitchen building in Armstrong Park.

More recently, in October 2010, when I was still hosting the Sunday night Kitchen Sink of new releases, “What’s New," I received a CD in the mail titled, “Leroux: The Session Years." I became intrigued with one of the tunes, “Reach Out,” not knowing exactly why until I read the accompanying literature and realized that the late New Orleans band leader, producer and composer Wardell Quezergue had written the string arrangement. I quickly emailed Rex Pearce, who was promoting the CD, and this is what he shared:

'He (Wardell Quezergue) actually arranged several tunes. The owner of Studio in The Country had four other songs he needed string arrangements so I called Wardell. Wardell and I drove up to Bogalusa together. He also found the symphony players. On the way I asked Wardell where he learned to arrange songs thinking it would be some school of music. He said UHK. I said Wardell I have not heard of this school. He laughed and said, "University of Hard Knocks."

Wardell was really gifted as I remember. He asked for a tape of the songs and what key each song was in. The story is he did not sit at the piano to write the parts but just wrote them on the sheet music direct. I think Wardell is a genius.’

Wardell Quezergue has joined the ancestors, but his legacy will continue to inspire us season after season; year after year as long as we remember and play the classics and the hits: "Iko Iko" and "Chapel of Love" by the Dixie Cups, "Trick Bag" by Earl King, "Big Chief" by Professor Longhair, "Barefootin’" by Robert Parker, "It Ain’t My Fault" by Smokey Johnson, "Mr. Big Stuff" by Jean Knight, "Groove Me" by King Floyd, "Mojo Hannah" by Tammy Lynn, Going Back to New Orleans” by Dr. John, and the superb arrangement of “Good Morning Heartache” sung by the late Johnny Adams.

Services for Mr. Wardell took place on Monday, Sept 12 at 11 am at The Corpus Christi Catholic Church, 2022 St. Bernard.