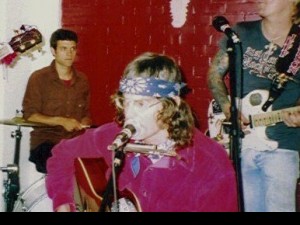 Mickey McLaughlin was born in 1953 he joined the chorus in 2011 just a few days ago. Slewfoot and Cary B were one of the first groups to play St. Anna's Mission to Musicians. Mickey played the Quarter as a street musician for years. He would haul around town in a very old barely holding together 1980's station wagon. Mickey wore a worn cowboy hat or bandana. Mickey loved music and musicians and as long as I knew him wanted everyone to play fair. He wanted the best for people.

I remember when he booked Little Freddie King and told me. His eyes lighted up and he reminded me of a kid opening a present on Christmas morning. Such was his passion for real music by real people. In an interview with Freddie, Slewfoot talked about the rhythm of horses and carriages going down Royal Street - his music picked up that rhythm. He loved playing, simply playing, and he tried to help folks out in need.

St. Anna's will host a full funeral mass for Mickey on Wednesday, April 27th; some of his ashes will be distributed in the memorial garden at St. Anna's and we will host a grand Second Line in his memory. We invite musicians to contact St. Anna's who wish to volunteer to sing or play at his funeral. We hope that many will come to honor a real good guy; a true street musician, a friend to many and a gentle soul.

On Wednesday April 27, 2011 a full solemn funeral mass will be held at St. Anna’s Episcopal Church, 1313 Esplanade Ave., at 6:00 PM. Following the service, at approximately 7:15, the community will step off in a Second Line tribute led by the famed Tremé Brass Band. The procession will travel down Esplanade Avenue, turn on to Frenchmen Street and end with a Benediction in front of the Apple Barrel Lounge, where Mr. McLaughlin and Cary B often played. The community of musicians, artists, residents, and friends of Mark “Slewfoot” McLaughlin are invited to attend the Solemn High Gospel/Blues Mass, Second Line, and memorial gig at the Apple Barrel, where musicians are welcome to bring their instruments and join in the celebration of Mr. McLaughlin’s life.

Memorial gifts in Mr. McLaughlin’s name may be made to St. Anna’s Mission to Musicians fund and sent to 1313 Esplanade Ave., NOLA 70116. For further information contact St. Anna’s Church at 504-947-2121 or fr.bill@stannanola.org.