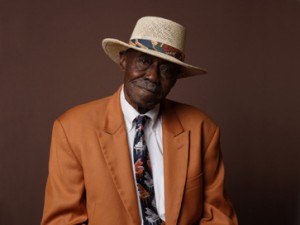 Willie "Pinetop" Perkins passed away in his sleep at the age of 97 at his home in Austin, Texas.

Willie Perkins born in 1913 on a cotton plantation outside of Belzoni, Mississippi left home at an early age and supported himself by playing guitar in juke joints until he was in a brawl with a choir girl who slashed the tendons in his left arm. Unable to play the guitar, Perkins learned to play the piano by observing others and played extensively in the 1930's and 40's throughout the Mississippi Delta as a sideman with various blues artists and spent three years with Sonny Boy Williamson on the King Biscuit Time radio show on KFFA in Helena, Arkansas.

After playing with B.B. King in Memphis, Perkins teamed up with Earl Hooker and toured throughout the south in the early '50s. During a session at Sun Records the pair recorded a version of "Pinetop's Boogie Woogie" a song originally written and performed by Clarence "Pinetop" Smith, who had died in 1929 at a young age from a gunshot wound. Perkins secured his nickname, "Pinetop" with his version of this song.

For over ten years in the 1960s, "Pinetop" played with Muddy Waters and eventually sided up with other Waters sidemen and formed the Legendary Blues Band, recording off and on for thirty plus years.

Pinetop happily played as a sideman until his eighth decade where he moved from behind the shadows and became a headliner. This resulted in the release of fifteen solo records in fifteen years, beginning in 1992. Albums "Born in the Delta" and "Legends" were both nominated for Grammys – in 1997 and 2000 respectively. In 2005 another Grammy nomination for Ladies Man and in that same year, he was also presented with a lifetime achievement award at the Grammys.

Pinetop a recipient of the National Heritage Fellowship in 2000 from the National Endowment of the Arts was featured in the documentary Piano Blues, directed by Clint Eastwood for the PBS series, The Blues and produced by Martin Scorsese.

In addition, Pinetop continued to win the Blues Music Award for best blues piano every year until 2003 when he retired to give his contemporaries a chance and the award was renamed the Pinetop Perkins Piano Player of the Year.

Most recently in 2010, Perkins became the oldest Grammy winner when picking up a Grammy for best traditional blues album for “Joined at the Hip: Pinetop Perkins & Willie 'Big Eyes' Smith."