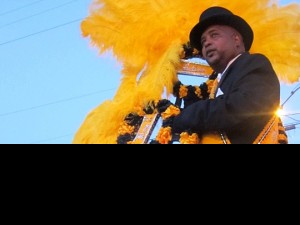 After dark on Feb. 24—the night before the first big weekend of Mardi Gras parades— the Stooges Brass Band paused by the entrance to Forestall Park in the Lower Ninth Ward to perform "A Closer Walk With Thee," surrounded by members of the Big 9 Steppers, neighbors and a few revelers who'd followed the music around the corner from Mickey Bee's Lounge on St. Claude. The crowd grew quiet and watched respectfully as a wreath was brought forward. It bore the first name of 39-year-old Josh Bernard LeBlanc, who died here after being caught in a hail of bullets in December.

Dressed to match the wreath in a spray of black and gold ruffles, the image of a second line man dancing across his crest and the feathers of his yellow fans rustling in the night breeze, DJ Action Jackson, a friend of LeBlanc's, set the honorary display on the park fence. Then the somber moment passed, the band launched into an up-tempo number and the crowd got back to the business of the evening: honoring Jackson, the Grand Marshal for the 2011 Oshun parade.

It was an appropriate kick-off for Action's debut in Oshun, where he planned to buck Mardi Gras parade tradition by adding second line gear to the usual black and white grand marshal tux getup. Born and raised in the Ninth Ward, the busy Q93 DJ is as much a part of his community as the second line institution itself.

"I couldn't make it to [Josh's] funeral, so I'm bringing the wreath there in his honor tonight," Action explained earlier, at his home in the Melia subdivision, where family, friends and neighbors were gathering to join him for the evening's festivities. He added that because his float in Oshun wouldn't be handing out throws, he wanted to have a party where he could show some love to the folks who regularly catch him spinning around town, or know him from his 12-year-long affiliation with the Big Nines.

"I had some handkerchiefs made, and I have some buttons," he said. "That's really why I'm going down there tonight -- to give the gifts to the people that support me."

After the second line wound its way back to Mickey Bee's, Action showed off his fans and sash to admirers as the party got underway. Among his guests that evening was Mike Dunn, whose meticulous artistry brought Action's Grand Marshall look, pegged to the track, "Black and Yellow, Black and Yellow," to life - after a solid week of six to eight hour days, spent painstakingly applying rhinestones, stitching ribbons and cutting velvet.

"It's a process," Dunn admitted, "but I've been doing it so long and I do so many of the clubs ... Once you put it together, that's the beautiful part."

When Action's not spinning tracks, he and his brother, DJ Ro (who was coincidentally Oshun's first Grand Marshal 15 years ago), spend much of their time looking out for their community through an organization Ro started called Don't Even Trip Dream Foundation.

"The last two years on Thanksgiving, we gave away turkeys at St. Claude and Caffin," Action recalled. "We get donations and match the donations. We also do back to school supplies, where we pick a school and give out book sacks and pencils and pens. Then, instead of a regular Christmas toy drive, this year, we picked five needy families and supplied them with what they needed."

But come Mardi Gras time, Action is focused firmly on the music - which his mother, Yvonne Watson Jackson, thinks may be in his blood. In addition to his younger brother's DJ career, Yvonne points out that Jackson's maternal grandfather, Andrew, played snare drum in the Olympia Brass Band, and his great uncle, Thomas played trumpet at the Paddock Lounge.

In addition to his usual gigs at Mickey Bee's, Seal's Class Act and other venues, the 49-year-old is a staple in the NOMTOC parade and either sits at the DJ booth or rides on the giant Q93 boom box in Zulu.

"When you ride on the boom box, you're closer to the people," Action muses, considering his favorite part of Carnival. "When we get under the bridge at Orleans and Claiborne, we all jump off and get onstage and get on the mic and play with the Indians. That's really my thing. Then we walk back up Canal and to Bourbon. I don't go on Bourbon Street often but if I'm going to go, it's going to be the craziest day of the year and that's Mardi Gras. And that really completes my day." Well, sort of. "I do still have to go to work at Seal's that night."

A good DJ's work is never done. Hopefully you were able to catch Oshun Grand Marshal Action Jackson on Float No. 12 of Oshun, Uptown on Friday, Feb. 25. 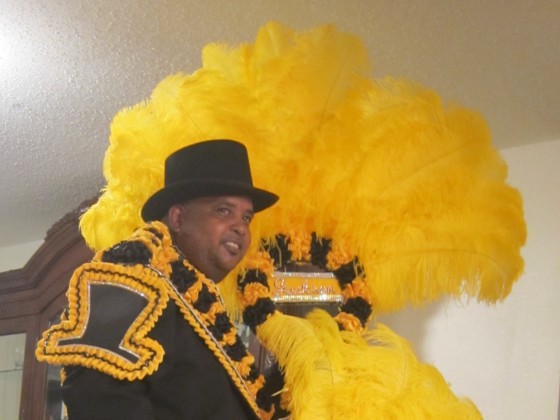 Action Jackson poses for photos before heading out. 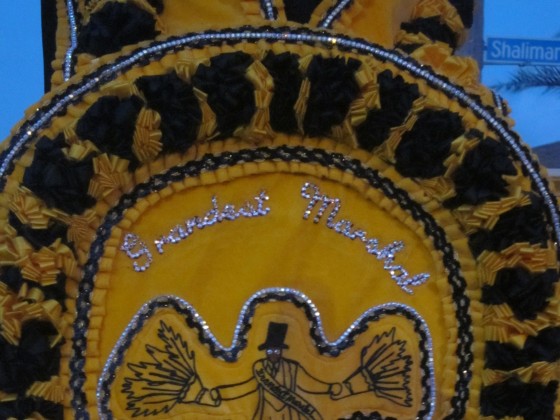 Action Jackson, “Grandest Marshal” of them all. 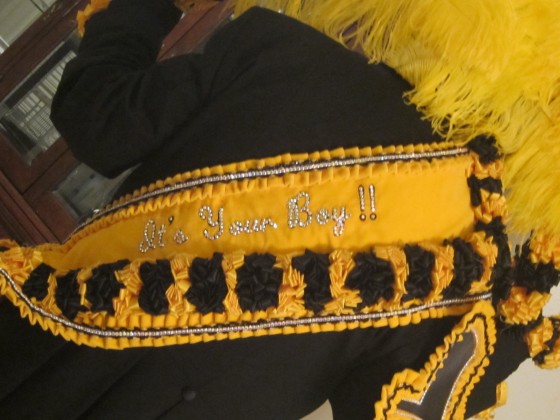 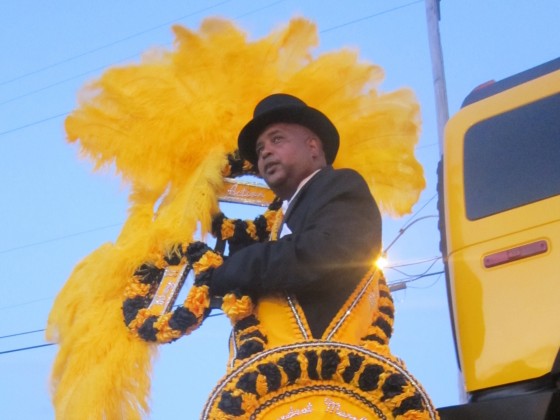 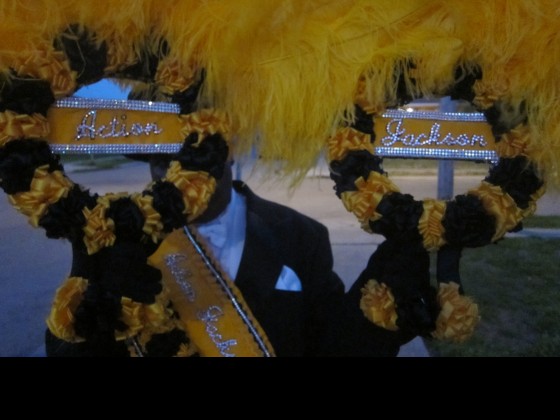 Action shows off his fans. 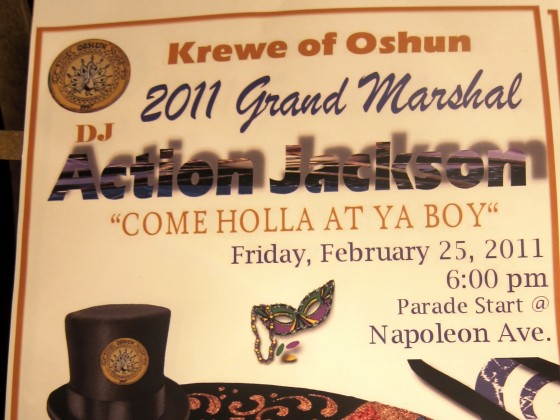 A Krewe of Oshun parade poster. 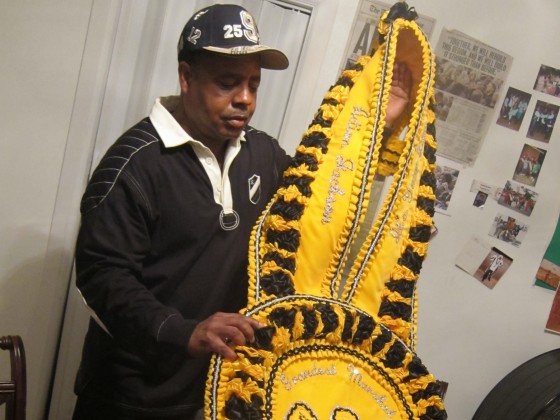 Mike Dunn shows off his handiwork. 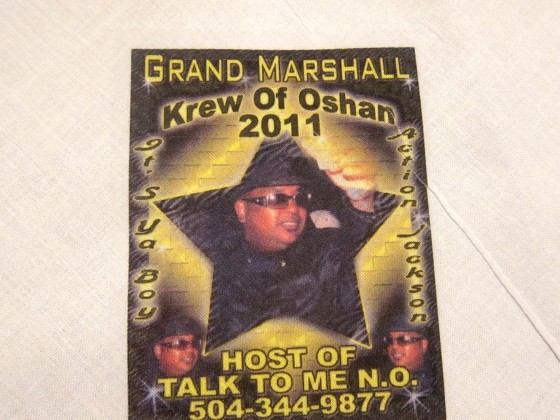 One of Action Jackson’s handkerchief throws. 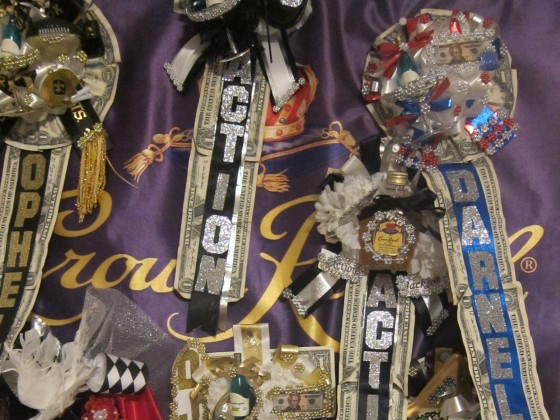 Action’s memorabilia from previous second lining costumes is displayed in his home. 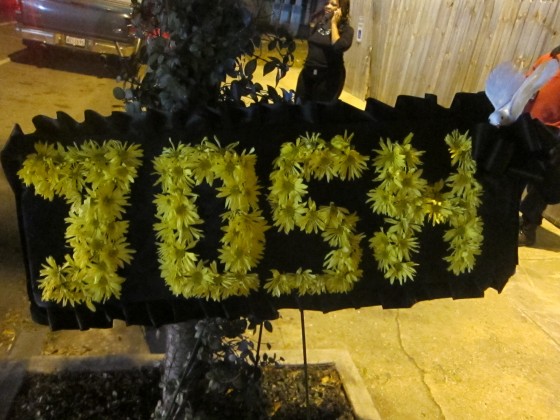 Daisies and a dove adorn a wreath in honor of Josh LeBlanc. 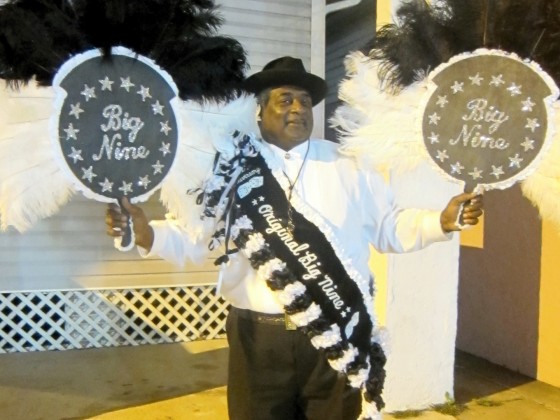 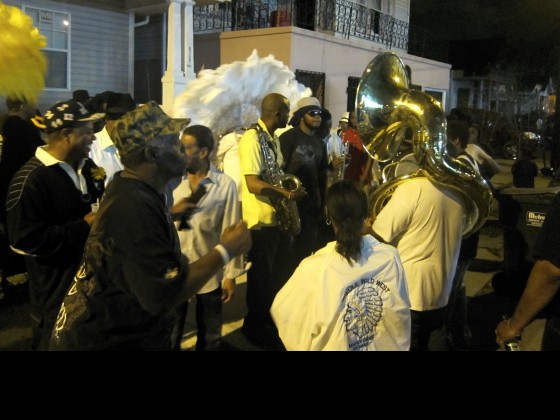 Mike Dunn (far left) and members of the Stooges Brass Band and the Big 9 Steppers assemble outside Mickey Bee’s. 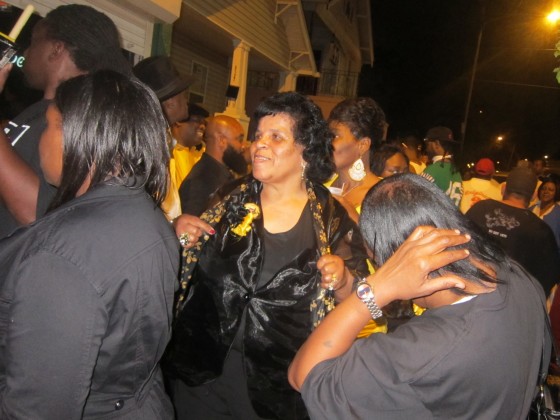 Great article on my big brother Action Jackson, the correct name of our foundation is "Don't Even Trip Dream Foundation." Visit our website at www.donteventripdreamfoundation.org to see all our community events. General donations are accepted and appreciated.

Thanks very much for the nice words on the article and the correction. We updated the name of the foundation in the article, thanks!