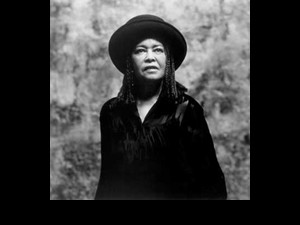 Jazz singer, actress, and civil rights activist Abbey Lincoln passed away on August 14 at the age of 80 after a long period of deteriorating health.

Her singing career spanned several decades, and although her vocal style was influenced by Billie Holiday, she often gravitated towards modern music — including her own material — with a particular focus on civil rights. She made her biggest musical splash with drummer Max Roach (her husband from 1962-1970) on his civil rights-centric album We Insist: Freedom Now Suite.

Not long after her singing career began, Ms. Lincoln landed a singing role in the film The Girl Can't Help It. She later starred in two more films, Nothing but a Man and For the Love of Ivy.

She continued singing and recording in the 1970s and 80s on smaller labels until 1990, when she released The World Is Falling Down on Verve with an all-star cast including Jackie McLean and Clark Terry. She subsequently released a series of CDs on Verve with a highly intellectual bent but preserving her raw, emotional style.

The jazz world mourns her loss while celebrating her legacy of activism through music and film.