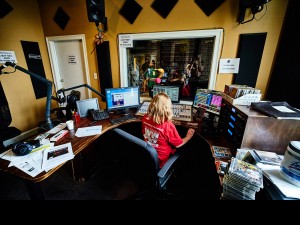 WWOZ's show hosts have begun compiling lists of their favorite CDs of 2018. Let those-in-the-know point you to the latest great tunes and help you catch up on what you might have missed.

T.R. Johnson, host of the Tuesday edition of Jazz from the French Market, 4-7p

1. Imarhan, Temet - Discovered this Algerian Tuareg desert rock quintet when they came to New Orleans in the spring and they are tremendous.

2. Meshell Ndegeocello, Ventriloquism - Much anticipated and did not disappoint.

Sean Ardoin. Kreole Rock and Soul. Louisiana Red Hot Records. Nominated for a Regional Roots Grammy Award as "Kick Rocks," which is the name of the first track.

Various artists. Travailler, C'Est Trop Dur: The Lyrical Legacy of Caesar Vincent. Swallow. (2 CD set) Though he didn't live to see it, Vincent created what is today one of the most popular Francophone songs in the world, "Travailler, C'Est Trop Dur." Includes some original recordings by Caesar Vincent dubbed with modern musicians as well as the best covers of Vincent songs by Zachary Richard, Steve Riley, David Greely and more performing the songs of this great songwriter.

In no particular order:

Sondra Bibb, host of the Jazz from the French Market with Sondra Bibb, Wednesdays, 4 - 7pm

This was a fun year in music, but half of the fun came from rediscovered or newly re-released albums.

The best brand new albums were:

Bon Bon Vivant's Live at the New Orleans Jazz Museum came out at the beginning of this year and was just fun the entire way through. There was some good banter, a history lesson, and just a fun time.

Dr. Lonnie Smith gets all in your head with All In My Mind. Just a great album all the way through.

Under The Lake was the best surprise from a new artist. Their Jazz, Groove & Attitude album was good for just sitting back on a rainy night and enjoying the flow.

Joey Alexander has been an absolute pleasure to listen to as he matures. I was fortunate enough to catch a performance of his years ago when he was only twelve. His latest album, Eclipse, continues to show how well he's growing into his seat at the head of the band and still reflect his respect for those who played before him.

The best newly discovered albums were:

John Coltrane Both Directions at Once: The Lost Album (Deluxe Version), recently found with his first wife's things and mastered. It sounds different from the Coltrane you're used to and have in your collection already, but it's always fun to hear the slight changes of practice sessions before an artist makes it big.

Sun Ra made me wonder how much music is just sitting out there waiting to be rediscovered. Of Abstract Dreams, was found randomly in a professor's pile of recordings rescued from school "junk" which could have easily ended up in the trash. The Arkestra just playing between gigs. Everything that makes them great, and an album I had to jump on as soon as I saw it.

The best re-releases or blasts from the past have to go to:

Sgt. Pepper's Lonely Hearts Club Band 50th Anniversary came back on vinyl with all of the goodies packed in the original album. Minus a few characters on the cover that no one apparently bothered to get releases to use their images for. But that's how those insects are...I mean Beatles.

Miles Davis & John Coltrane, The Final Tour: The Bootleg Series, Vol. 6. let's you pretend you're back in the audience during these two amazing musicians' European tour in the sixties. If you have a day to sit back, pour a drink, and let the world fade away, this is the set that will let you do that and not want to come back to the present.

Charles Mingus Live at Montreux was a big surprise. The Montreux Jazz Festival finally decided to release recordings from their past performances. This is from the 1975 festival. I wasn't expecting it, but can't wait to see what else they release in the future.

Walter Wolfman Washington, My Future Is My Past

Keith Frank, “Return of The King”

Carbon Poppies, A Rain On My Face & You and I” B How Long & I’ll Meet You There

Lowdon Brass Band Featuring Ricky B & Bigalow, A “You Know Me” B “Ponder This”