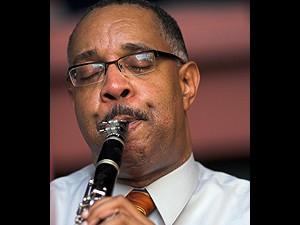 It's tough to find a reference point for Dr. Michael White's musical style. There are so many warring tendencies at play in complex clarinet work: the passionate and the intellectual, the traditional and the novel. There's a cerebral quality, a sense of probing and exploration that sometimes seems at odds with the traditional idiom in which he performs. He can play the traditional music like no one's business, but it's hard to imagine mistaking Dr. White for an old-time New Orleans clarinetist.

Like many other New Orleans greats, White had a stint in Danny Barker's Fairview Baptist Church Band. In 1979, he took over co-leadership of the Young Tuxedo Brass Band (which still plays every Sunday at the Veranda at the Intercontinental Hotel in New Orleans), a group originally founded in 1938. He also plays with his own Original Liberty Jazz Band, which he formed in the early 1980s to preserve traditional New Orleans jazz.

White was recently named "Humanist of the Year" by the Louisiana Endowment for the Humanities. The award recognized his contributions to the study and understanding of music. Yet for all his grounding in the musical past, Dr. White has a keen interest in the future. On his 2008 record Blue Crescent, White did something unusual for a traditional musician: add to the repertoire. Of particular note is the sprawling composition "Katrina", a pseudo-impressionistic hurricane narrative. If the term "contemporary trad" so often seems like an ostentatious oxymoron, then Dr. White is trying to give it real meaning. His music uses the language of traditional jazz as a jumping-off point, but he does everything in his considerable power to make it relevant.

All of which brings us to White's latest project, Ensemble Fatien. The group was assembled by Ivory Coast native Seguenon Kone and features (among others) Bruce "Sunpie" Barnes, Margie Perez and Jason Marsalis. Their unique sound had a warm reception at Jazz Fest 2010; it's best described as a mix of West African and Louisiana music but there's more to it than that.

It's surely no coincidence that Kone chose White to participate in Fatien. Both men are grounded in traditional forms but striving to make them relevant in the modern era. White's playing on the group's debut record never fully shakes off its bluesy veneer, but it's interesting to hear the subtle ways in which he modulates his approach to the material at hand. "Drum Call", which opens the record, is a study in contrasts. It opens with a droning, repeated phrase, a rhythmic backdrop for the evolving drum part. White is audible but inconspicuous, blending with the other horns. Later on he has an extended solo, full of tonal exploration, of notes bent and smeared every which way. It ranges from florid passages of rapid notes to quavering long tones, incorporating squeaks and growls along the way. Maybe this is where Dr. White is really at home: doing something combined with something new.

Dr. White played at the House of Blues not so long ago, as a guest at Kermit Ruffins' House Party. Ruffins was living it up as usual, swaying to the music, calling to the crowd with that broad grin. And there was White, hunched slightly over his instrument, glasses balanced on his nose, looking very much like the professor that, after all, he is (he teaches Spanish and African-American Music at Xavier University). In such a loose, funky setting, he stood out, seeming less at home than with the more adventurous Ensemble Fatien.

I also love listening to the

I also love listening to the traditional and jazz songs. When I am tired and feel boredom then this kind of songs swept my tiredness. I did't heard the name of Dr. Micheal White before. After reading this blog, I came to know that Mr. White is a famous and well-known person in the musical field. I love to listen his melodious songs though I have'nt listen yet. But I will search and listen to his songs. I am so excited to listen to his traditional and jazz songs.