Authored by:
Zachary Young
Published on: May 9th, 2010 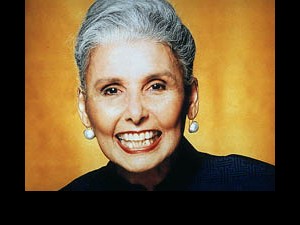 Lena Horne, a singer and actress who became one of the most popular entertainers of the last century, died May 9 at age 92.

Born in Brooklyn in 1917, Horne was performing at the Cotton Club in Harlem by age 16. After some years touring with bands and playing clubs, she became one of the first black performers to sign with a major movie studio when MGM granted her a seven-year contract. Her debut for the studio was in the 1942 film Panama Hattie. Horne sung the title tune in the musical Stormy Weather, but due to the racial climate of the time, she had difficulty obtaining leading roles. In 1943, however, she co-starred alongside Louis Armstrong in the musical Cabin in the Sky.

In the 1950s, Horne found herself on the Hollywood blacklist because of her left-wing political views. As she became disenchanted with Hollywood she occupied herself with overseas tours, and received thunderous receptions all over the world. In Israel she was welcomed as royalty by Golda Meir, then the Israeli Minister of Labor.

Civil rights were an abiding passion for Horne, borne out of her own struggles as an African American performer. She joined the NAACP at a young age, while attending high school in Atlanta, Georgia. While performing for American troops during World War II, Horne refused to play to segregated audiences – or to audiences in which black soldiers were made to sit behind German POWs. She maintained a long relationship with Eleanor Roosevelt, whom she met at the White House in 1944, based on their shared belief that racial tolerance was a prerequisite of true democracy.

Horne’s musical career continued into the late ‘90s. One of her final recordings was a duet with Frank Sinatra on the song “Embraceable You.” Thousands attended her funeral in New York City on May 14.